Rumors are once again swirling around the future of Manchester United’s World Cup-winning midfielder Paul Pogba after the French ace admitted that he has concerns about his role in Ole Gunnar Solskjaer’s squad.

Pogba, who became the then-most expensive signing in Manchester United’s history when he returned to Old Trafford from Juventus four years ago, has been the source of continued speculation as to his future in recent months amid concerns that the cultured playmaker is an ill-fitting piece in the Norwegian’s squad.

Real Madrid, who are longtime suitors of the 27-year-old, are thought to be considering a renewed drive to tempt Pogba to the Bernabeu ahead of next season – speculation which seems to be continually stoked by the player, and will surely increase given statements made by the Pogba this week while on international duty.

“I had never known such a difficult period in my career,” Pogba said of his current situation in Manchester to RTL.

“The France team is a breath of fresh air, the group is exceptional, it’s magic.“

I like Pogba, but I like @ManUtd more. If you don’t want to play for us, then leave, my allegiance remains with the club.

What is pogba on? Let him leave for god sake he isnt happy and if we are all honest he hasn’t been consistent for years and yes I agree he will move on and maybe smash it at that club all the best to him hope he does, but my club is man utd, I only care about it time to cut ties!

Pogba has no business feeling sorry for himself. How about maybe stop giving away ridiculous penalties and work harder off the ball? The vast majority of #MUFC fans will be quite happy to see him leave in the summer. https://t.co/uSRdKcyF8W

Pogba has appeared 10 times for the Red Devils this season but has only made the starting lineup on half of those occasions, with Solskjaer preferring the Portuguese Bruno Fernandes as the team’s chief creative force.

Donny van de Beek, the big money summer import from Ajax, is also heaping pressure on Pogba for inclusion in the heart of Manchester United’s midfield, while the likes of Nemanja Matic, Fred and Scott McTominay tussle to be considered as the primary defensive ballast in the center of the park.

Pogba’s statement, though, hasn’t gone down well with sections of United supporters, many of whom appear to be growing weary of the unceasing speculation as the Frenchman’s future.

Paul Pogba to RTL: “This is a period I’ve never experienced in my career. The French national team is a breath of fresh air… we are very happy to come here. It’s not the same as with the club. We all group together, it is magical”. [@GFFN] 🔴🇫🇷 #MUFC #France #Pogba

Didier Deschamps, head coach of the French national team, agrees that the current situation at his club is beginning to become a worrying situation for all concerned, and suggests that Pogba is being mismanaged at Old Trafford.

“He is in a situation with his club where he cannot be happy, neither with his playing time nor with the position he is playing,” Deschamps told reporters.

“He is not in his best period, he has had a series of injuries and Covid-19, which has hit him quite hard. He needs to find his rhythm.

“We can’t say that he is fulfilled in what he does at club level. With me, there is no such concern, but I try to manage it too. When a player is not comfortable at his club, obviously, he is happy to play for the France team.”

Pogba is expected to play for France in Tuesday’s Nations League game with Sweden ahead of a return to domestic action when Manchester United host West Brom on Saturday. 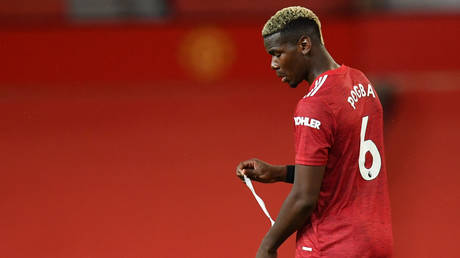