Fans of reigning world and Olympic champion Alina Zagitova have lambasted the International Skating Union (ISU) after it was revealed their idol was not included in the list of nominees for a set of prestigious skating awards.

The newly introduced awards, which have already been dubbed “Oscar of figure skating”, will be held on July 11 and will name the best Skaters, Coaches and Choreographers in seven categories: most valuable skater, best costume, most entertaining program, best newcomer, best choreographer, best coach, lifetime achievement award.

Fans, journalists and ISU members were allowed to vote for their candidate by February 10, before a committee comprised of famous figure skaters shortlisted the top three candidates in each nomination.

The inaugural ceremony was set to take place in Montreal during the 2020 ISU World Championship, but was rescheduled for July after the global event was cancelled due to the coronavirus crisis.

On Monday, the ISU released the ceremony’s trailer featuring skaters chosen for nominations, which surprisingly missed out Zagitova. The fact didn’t go unnoticed by the skater’s fans, who bombarded the ISU’s social media pages with angry messages accusing the governing body of disrespect, a biased approach and even corruption.

Later, Ari Zakarian, the organizer of the inaugural ceremony, confirmed that Zagitova didn’t enter the top-three list of nominees, citing some unclear problems with the skater’s team apparently referring to technical moments they failed to settle with her representatives.

Zakarian’s statement led to an uproar among Zagitova’s supporters, who suggested that he purposely excluded Zagitova from the nominees, being an agent of her rival Evgenia Medvedeva.

“She might temporarily take a pause but it doesn’t mean that she brings less to figure skating! I have started to watch figure skating only after her Olympic black swan as most of the friends? And NOW, CURRENT RUNNING OLYMPIC AND WORLD CHAMPION IS NOT IN THE VIDEO?! REALLY? Shame on ISU,” one person wrote

“Are you okay? You don’t know the reigning Olympic champion Alina Zagitova?” one more comment read.
“Why is Alina Zagitova not in the video? The current Olympic Champion, World Champion and the most titled figure skater of our time in women’s single skating!! Shame!!!!” another user added.

“Shame on you, Mr Zakarian. We don’t want your fake award. No Alina, no party,” Zagitova’s fan wrote.

“We should have expected this! There could be no independent vote in the ceremony organized by Zakarian.”
‘Yes, of course Medvedeva will win, bravo Zakarian” one more comment said.

Neither the ISU nor Zagitova have commented on the situation, which they probably don’t treat quite as tragically as Zagitova’s supporters, who even created the hashtag #WeVotedForAlinaZagitova. 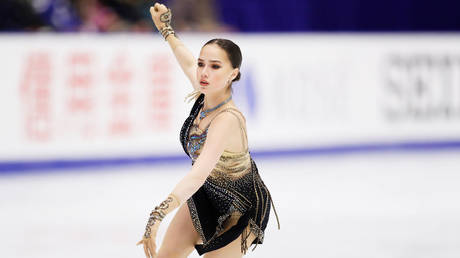