NHL side the Los Angeles Kings have suspended an employee who is being sued for alleged sexual misconduct, reportedly including waving his crotch in a woman’s face in the mascot locker room and leering at her breasts and behind.

The team’s lion mascot, Bailey, is said to be at the center of the allegations from a woman who claims to have rejected sexual advances while she was working as part of the Kings’ Ice Crew entertainment staff.

Tim Smith, the man inside the furry suit and the club’s senior manager of game presentation and events, is the figure named in a reported lawsuit for more than $1 million in damages that includes lewd jokes, sexual comments and leering at her “breasts and buttocks”, according to the Los Angeles Times.

The woman, known as Jane Doe to protect her identity, is thought to have joined the team in 2018 before being fired after telling Smith his actions were unwanted.

She is said to have been promised protection from Smith in return for resuming her duties, only to endure him allegedly putting his crotch in her face in the mascot locker room while thrusting his hips and making rude remarks.

Smith was sued for sexual misconduct stemming from a separate incident in 2017, when he was accused of groping a man’s buttocks in a Staples Center elevator.

An internal investigation found no merit in the allegations and the suit was reportedly later settled.

In a statement, the Kings said they wanted everyone to work in an environment free from harassment and discrimination and were taking the allegations “very seriously”.

“We will conduct a thorough investigation into this matter,” they promised.

Had an amazing time #GrandCanyon pic.twitter.com/YUdY0c16K4

“The employee in question has been suspended, effective immediately, pending the conclusion of the investigation.”

Smith remains the only name mentioned on a form on the team’s website inviting the public to request an appearance from Bailey.

Fans are also able to pay between $250 and $1,800 in return for two game tickets and the chance to ride with Bailey while holding on to him as he drives a cart across the ice after home games.

The long-serving lion acts as a figurehead in support of the team’s Kings Care Foundation non-profit children’s charity. 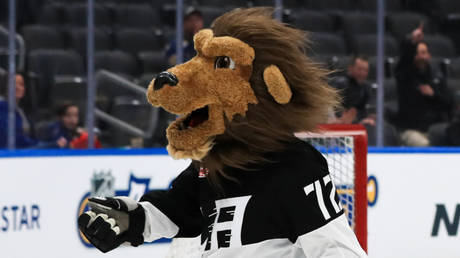