The Washington Redskins have announced that they will ‘review’ the name of their franchise amid pressure from sponsors aggrieved at the potentially racially insensitive associations which come with it.

One of the team’s leading sponsors, FedEx, paid a sum of $205 million more than two decades ago for naming rights of the team’s stadium in Maryland but in light of the spate of protests against racial inequality in the United States, announced this week that they would petition the team to switch it’s ‘Redskins’ title – a term considered racially pejorative to Native Americans.

“We have communicated to the team in Washington our request that they change the team name,” FedEx said in a brief statement this week, echoing a debate which has existed within the sport long before the international shipping company became associated with the team.

And it seems, particularly given the implications being felt across the United States throughout the George Floyd protests, the team’s owner, Dan Snyder, appears open to the idea after repeatedly resisting it in recent years.

And here it is: the Redskins are undergoing a thorough review of the team’s name.

And let’s be clear: There’s no review if there’s no change coming.

Redskins on way out. pic.twitter.com/ZrS3cCvhMg

“In light of recent events around our country and feedback from our community, the Washington Redskins are announcing the team will undergo a thorough review of the team’s name,” a statement issued on Friday reads.

“This review formalizes the initial discussions the team has been having with the league in recent weeks.

“Dan Snyder, Owner of the Washington Redskins, stated, “This process allows the team to take into account not only the proud tradition and history of the franchise but also input from our alumni, the organization, sponsors, the National Football League and the local community it is proud to represent on and off the field.”

“Ron Rivera, Head Coach of the Washington Redskins remarked, “This issue is of personal importance to me and I look forward to working closely with Dan Snyder to make sure we continue the mission of honoring (sic) and supporting Native Americans and our Military.”

“We believe this review can and will be conducted with the best interest of all in mind.”

The ‘Redskins’ name was initially given to the team by former owner George Preston Marshall. A known supporter of racial segregation, Marshall’s prior comments with regard to race led to a statue of him being removed from outside the team stadium last month.

The name, and in particular the man who bestowed it, has long been a controversial subject in NFL circles but it reached fever pitch in the past month. Fawn Sharp, president of the National Congress of American Indians, demanded an urgent switch of the team’s name, saying that no one should have to play for a team named after a ‘racial slur’.

“The racial slur can no longer be removed by the complicit, indifferent, tone-deaf ownership of the franchise, because the stain they have fixed onto their own name and enterprises is now permanent,” she said. 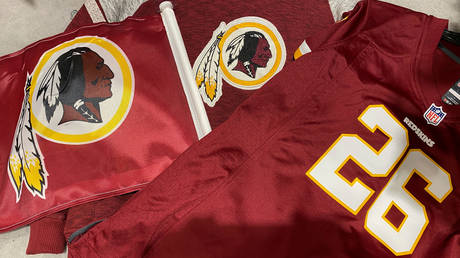