Ex-Seattle Seahawks defensive back Kemah Siverand has apologized for dressing a woman in NFL gear to fool hotel security in a bid to break quarantine measures, saying on Twitter that his actions were ‘absolutely inexcusable’.

The 23-year-old Siverand was cut from the Seahawks roster when details of the incident emerged two weeks ago, with head coach Pete Carroll understood to have implemented a ‘zero tolerance’ policy when it comes to breaking team rules amid the team’s self-imposed Covid-19 ‘bubble’.

Siverand, an undrafted free agent, has now commented on the matter for the first time and says that after considering his role in the incident he recognizes that his actions were wrong and that he is “truly sorry” for breaking team rules.

“After taking time to reflect and really consider the seriousness of my actions, I have tried to find the appropriate words to apologize to all of those affected by my poor decision and immaturity,” Siverand wrote online.

“I’ve privately apologized to Coach [Pete] Carroll, [general manager] John Schneider, and the Seahawks organization. I violated team rules, which would have been unacceptable in normal times, but absolutely inexcusable now during a pandemic. I understand my lapse in judgement put my teammates and the organization at risk, thankfully no one else was affected by my actions.”

I made a mistake, let people down, and am truly sorry. Thank you to everyone that reached out to offer support. pic.twitter.com/bBtkAwtCyq

The former Texas A&M and Oklahoma State college player hasn’t yet been picked up by another team despite being available for the past two weeks and was keen to advise any potential suitors that the actions which led to the end of his time with the Seahawks won’t be repeated elsewhere.

“I want to make sure this one mistake will not define me, and I will continue training harder than ever to continue pursuing my dreams of playing in the National Football League,” he wrote.

The move to cut Siverand was, reports say, a message to the remainder of the roster that excessive actions can be taken when players disobey team orders – particularly amid a global pandemic.

He was far from assured of his place on the roster when the upcoming cuts are made to trim squads ahead of the upcoming season, which begs the question: Would the Seahawks take quite the same aggressive stance had it been star players like Russel Wilson or Jamal Adams who had transgressed? 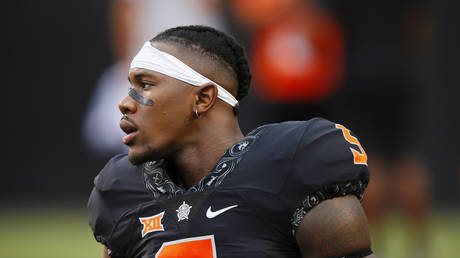