Three-time Pro Bowl star Patrick Mahomes and his girlfriend, Brittany Matthews, have revealed that they have become parents to a girl just hours after the women’s football team owner and fitness trainer hit back at online barbs.

The couple simultaneously announced the arrival of their first child, Sterling Skye Mahomes, in news that was enthusiastically greeted by the Instagram following of almost 5.5 million boasted by the Kansas City Chiefs quarterback and his fiancee.

Matthews, who sells fitness programs online Matthews and owns National Women’s Soccer League team Kansas City, had earlier hit back at comments she had received in response to showing off her bump at events including Super Bowl LV, where she watched the Chiefs lose to the Tampa Bay Buccaneers.

“Well, ladies, not trying to look ‘skinny’ in my maternity pics,” the 25-year-old railed on the platform, taking time out from managing an account dedicated to the couple’s dogs – who she calls herself a “mom” to – that has more than 212,000 followers.

“I’m very pregnant and not here to try and make myself not look pregnant.”

In warnings to her detractors, Matthews urged: “Women being hateful to other women on social media seriously needs to stop! If you have nothing nice to say then shut the f**k up.

“Shout out to all my amazing, sweet and supportive followers on here that always go to war with the hateful and awful people on my post[s]. You guys are just the best.”

One of the couples’ most frenzied early supporters after the announcement was Jackson Mahomes, the 6ft6, 20-year-old social media sensation and brother of Patrick known for his wacky TikTok videos, including insights into life as part of his superstar sibling’s entourage.

“You will be the best dad,” the younger Mahomes said on the NFL heavyweight’s account, writing in capital letters after responding twice under Matthews’ post. “Can’t wait for all the adventures.”

Mahomes and Matthews announced the pregnancy in September, shortly after they became officially engaged. 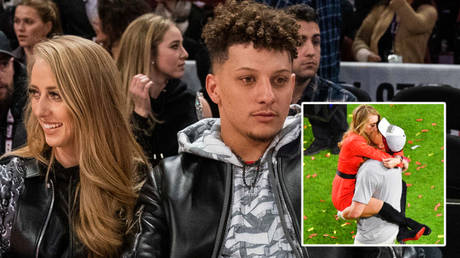