Footage has emerged of Dallas Cowboys safety Ha Ha Clinton-Dix, who formerly represented the Chicago Bears, scampering for safety after he disturbed two wild bears as he rode a scooter at a housing complex.

Clinton-Dix, who is a recent addition to the new-look Cowboys ahead of the start of the 2020 NFL season, posted incredible footage to his Instagram account showing security camera footage of the incident.

The clip shows the 27-year-old Pro Bowl safety riding past a parked car before he notices a bear and (presumably) its cub prowling the car park. Clinton-Dix immediately showcases some of the speed that has made him a defensive stalwart in the league for the past six seasons, as he abandons his scooter and sprints away from the potential danger.

“I play D, gotta be ready to go,” Clinton-Dix wrote in a message accompanying the clip, which appears to have been recorded on Monday night. “A lil high on my flip turn but the drive was there. I ain’t know how many was over there.”

It seems as though the two bears were just as alarmed as Clinton-Dix was, as the pair high-tails it in the opposite direction of the Cowboys star.

Somewhat coincidentally, Clinton-Dix spent the 2019 season as a member of the Chicago Bears where he recorded 78 combined tackles throughout the term. He has since signed a one-year, $4 million deal with the Dallas Cowboys as the team’s new head coach Mike McCarthy oversees a player overhaul in Texas.

McCarthy, though, will surely be hoping that his new charge doesn’t have quite the same reaction to the Bears should the two teams meet next season. 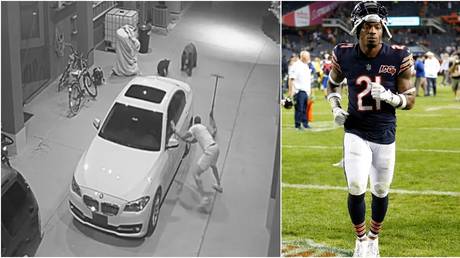