NFL star Deandre Baker, who was facing a possible life sentence related to robbery charges from May, is a free man as Florida authorities drop the case after a lawyer was arrested for attempting to extort money from Baker.

Baker, a first round pick in the 2019 NFL Draft, and Seattle Seahawks cornerback Quinton Dunbar, were arrested in May following allegation that the pair and two other men robbed partygoers of thousands of dollars and various valuable items of jewellery at a private function in Florida.

Baker was released from the New York Giants in the summer, while the charges against Dunbar were dropped in August as he remained an active member of the Seattle roster.

Baker might soon navigate a route back to the NFL, though, after the case fell apart on Monday when a Florida lawyer was arrested by authorities for allegedly attempting to extort money from Baker on behalf of the supposed victims of the robbery.

Per multiple reports, William Dean attempted to extort $250,000 from Baker for each of his clients who would then presumably drop the allegations, or as police put it, “do anything you want, so long as the money is right.”

It was reported by ESPN in September that the alleged victims had already withdrawn their testimonies, admitting that Baker, “did not directly or indirectly participate in any robbery or assist in a robbery at the scene or elsewhere.”

Paul R Valcore, the assistant state attorney for Florida, later confirmed that the case was dead after witness credibility was called into question.

“The alleged victims and the known witnesses have become uncooperative and their credibility is inalterably tarnished,” he said.

Baker’s own laywer, Bradford Cohen, said in August that the entire case was flawed as it was built upon the testimony of people he described as “admitted liars“.

“I wish I could think what they’re thinking, but it’s an impossibility. It’s such bad judgment that you can’t even put yourself into their shoes to imagine what he was thinking to file this case.” 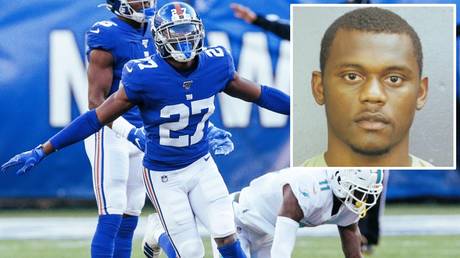 Buying alcohol could be BANNED aft...

'Who thought Dua Lipa in FIFA...