Neymar again pulled the strings as Paris Saint-Germain booked a place in the Champions League final for the first time in the club’s history with a 3-0 victory against RB Leipzig in Lisbon.

After needing a late, late comeback to see off Atalanta in the last round, it was a much more comfortable night for the French champions at the Estadio da Luz as they cruised to victory thanks to first-half goals from Marquinhos and Angel Di Maria, and a second-half finish from Juan Bernat.

Despite spurning chances of his own, Brazilian star Neymar was excellent throughout, serving as the spark for the PSG attack alongside the returning Kylian Mbappe and the superb Di Maria.

Nine years after their wealthy Qatari owners rolled into Paris – and hundreds of millions of euros of investment later – PSG are finally within touching distance of a title which has thus far eluded them despite an almost embarrassing degree of domestic dominance during that period.

For Leipzig – the club controversially set up by energy drinks giant Red Bull just 11 years ago – it was a disappointing night as the team coached by the highly-rated Julian Nagelsmann fell flat on the biggest occasion in their own short history.

Leipzig began the night in Lisbon pressing typically hard and fast, attempting to shut off PSG’s outlet to their danger men Neymar and Mbappe.

But it was that link-up which provided the first threat for the French champions when Mbappe slipped in his Brazilian strike partner, whose outside-of-the-foot effort grazed the Leipzig post.

Mbappe then thought he’d scored when the ball fell to him after Neymar charged down a clearance from Leipzig goalkeeper Peter Gulacsi, but the ball had rebounded off the Brazilian’s arm and the goal was ruled out.

At the other end, Marcel Sabitzer flashed a low shot at stand-in PSG goalkeeper Sergio Rico – making a rare start in place of the injured Keylor Navas – as the match started to fizzle into life.

It was the 13th minute when PSG took the lead, Neymar drawing a foul on the left and setting the stage for Di Maria to swing in a pinpoint cross for Brazilian defender Marquinhos, who rose to steer a header into the net.

It was a second strike in two knockout games for Marquinhos and was also a landmark one for PSG as they scored in a 34th consecutive European match – equaling the all-time record set by Real Madrid between 2011 and 2014.

PSG were in the mood and continued to press, with Neymar and Mbappe getting close attention as Leipzig tried to disrupt the French champions’ gathering momentum.

A rare Leipzig attack saw Konrad Laimer break the lines down the right to feed Yussuf Poulsen, but the Dane fired his shot into the side netting.

But just as he had against Atalanta, it was Neymar increasingly pulling the strings by dropping deep, collecting the ball and serving as the font for PSG’s creativity going forward.

The Brazilian almost caught out Gulacsi with a smart free-kick from the right, striking the post after swinging the ball low around the wall when the Leipzig keeper was expecting a cross into the box.

When PSG did double their lead three minutes before half-time, it was through a goal forged from their own high pressing as Di Maria hassled Gulacsi into fluffing a pass out from the back which PSG pounced on for Neymar to flick the ball exquisitely back into Di Maria’s path for a simple finish.

It was almost even worse for the Germans soon after when Mbappe turned on the afterburners down the right flank, squaring for Neymar who flashed the ball just wide.

The Brazilian’s finishing touch had again deserted him, but he could afford to laugh off the miss with PSG well and truly in the ascendency and a disjointed Leipzig facing a long road back into the game.

Leipzig manager Julian Nagelsmann introduced Patrik Schick and Emil Forsberg at the break in place of Christopher Nkunku and Dani Olmo, as Leipzig enjoyed a spell of possession at the start of the second half.

But it merely allowed PSG to show another aspect of their game as they stayed compact, keeping out the threat and always having the welcome outlet of Neymar and Mbappe at the other end.

On 56 minutes the Parisians put the game further out of reach when Di Maria took advantage of a slip by Nordi Mukiele to cross for Juan Bernat to head in.

The Leipzig players had stopped, thinking it had been a foul on Mukiele but replays showed no contact, leaving the Germans to rue the most basic of mistakes by not playing to the whistle.

Leipzig rallied as Nagelsmann made further changes, bringing on Tyler Adams – goalscoring hero from the quarterfinal win against Atletico Madrid – but it was to no avail as PSG refused to allow them the slightest foothold back into the game as the clock ticked down.

Thomas Tuchel’s team celebrated wildly in front of empty stands after the final whistle, having become the first French team to reach this stage of European football’s club showpiece since Monaco in 2004.

Awaiting them on Sunday will be the winners of Wednesday’s second semifinal between Bayern Munich and Lyon, with the German giants heavy favorites in that tie after their ominous 8-2 demolition of Barcelona last week.

But with PSG heading into the final riding a wave of confidence they have not enjoyed before in Europe – with Neymar and Mbappe in the mood, Di Maria’s pinpoint passing, and with added grit throughout the team – the French champions now stand their best ever chance of a first Champions League title. 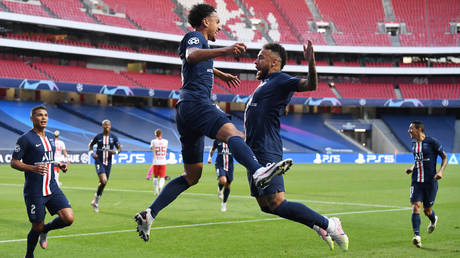 Navy splashes out £2million on adv...