Speculation linking UFC star Jorge Masvidal with a short notice title shot against Kamaru Usman at UFC 251 has grown as the UFC ‘BMF’ posts images of him undergoing the COVID-19 test necessary to compete next week.

As soon as it was announced that Gilbert Burns’ positive test for the coronavirus had ruled the Brazilian submission specialist out of his welterweight title challenge against Usman, the narrative switched immediately to who might be able to replace him – with two names appearing at the top of the queue almost immediately.

Colby Covington, eager to avenge a close but conclusive defeat to Usman late last year, was one, and the 2019 Fighter of the Year, Jorge Masvidal, was another. And it appears that “Gamebred” has stolen a march on his one-time friend and training partner.

However, if Masvidal has received the call from the UFC several hurdles must be cleared.

The first, and most obvious, is the promotion’s ongoing pay dispute with Masvidal. The promotion had moved on from the BMF champion and booked (the likely cheaper option) Gilbert Burns to face Usman. But following the Brazilian’s failed COVID test, Masvidal appears to be back in play, and now finds himself in a position of increased leverage to ask for the the paycheck he feels he deserves.

In addition to contractual negotiations, Masvidal will also need to undergo a battery of COVID-19 tests and spend time in quarantine before he is officially cleared to fight next Saturday night. However, he is not alone. UFC welterweight champ Usman has also not yet traveled to Abu Dhabi.

Jorge Masvidal just got a Covid-19 test done and I don’t think that was on his original to do list for July 4th 👀 (via @malkikawa) pic.twitter.com/VHdrIXQiSR

According to Jorge Masvidal’s manager Abraham Kawa, Masvidal is “absolutely willing” to take the Kamaru Usman fight on a week’s notice.

According to Masvidal’s manager, Abe Kawa, his fighter is more than ready to do what’s necessary to secure his world title opportunity.

It is also understood via a report from ESPN’s Ariel Helwani that the UFC are keen to hold the Usman-Masvidal fight next week (rather than holding it back for a few weeks) to satisfy terms of the arrangement with their Abu Dhabi partners, who have been assured that the UFC will hold “blockbuster” fights in the region.

Plenty of hurdles still remain if the UFC hopes to hold an Usman vs. Masvidal title fight at UFC 251. But, for the first time, it looks like efforts are being made to clear them. 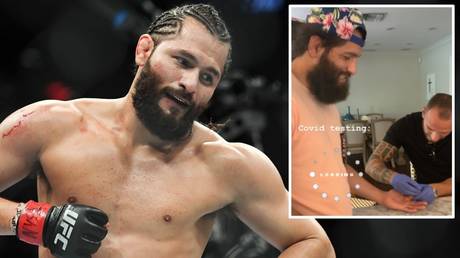