One of the biggest fights in the UFC lightweight division looks set to be finalized with reports Stateside claiming that Conor McGregor and Dustin Poirier have agreed terms on a titanic lightweight rematch.

U.S. outlet MMA Fighting has reported that sources close to the situation have confirmed that both men have agreed terms on the fight, with their matchup looking set to take place at UFC 257, which is scheduled for Saturday, Jan. 23 in Las Vegas.

McGregor reportedly remains keen on the fight taking place earlier, especially following the news of Amanda Nunes’ title defense against Megan Anderson at UFC 256 on Dec. 12 being scrapped due to undisclosed reasons.

McGregor has made no secret of his desire to get back into action, and publicly made a matchup with old adversary Poirier on social media, with the pair initially agreeing to face off in a charity boxing match in Dublin before the UFC started the ball rolling to match the pair in the octagon.

The pair first clashed at UFC 178, when McGregor TKO’d Poirier in 106 seconds in their featherweight contest in Las Vegas. Now the pair look set to face off at 155 pounds as they look to position themselves for a shot at the UFC lightweight title.

Currently, the belt remains in the possession of Khabib Nurmagomedov, who, despite his retirement announcement, has been strongly linked with a return to the cage in a bid to reach 30-0.

And those rumors will only intensify following a tweet from Khabib’s manager, Ali Abdelaziz, which stated simply, “30-0.” 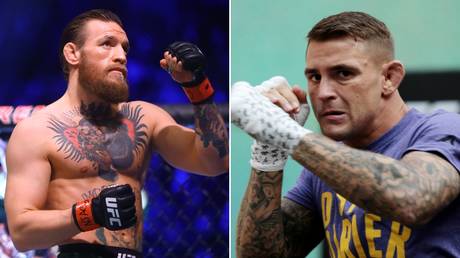 Boris Johnson becomes one of the f...