Russian world breaststroke champion Yulia Efimova has drawn comparisons to stunners from iconic TV series Baywatch after the sultry swimming star posed in a white bikini while splashing along a Malibu beach.

The California-based Efimova is a regular hit with her 213,000 Instagram followers, in no small part thanks to her steady flow of tasteful swimsuit snaps, often at the beach or posing by the pool.

On this occasion Efimova made waves as she splashed along the beachfront in sun-kissed Malibu while wearing a pristine-white bikini.

The swimmer appears to be a fan of US pop-rockers ‘Imagine Dragons’, adding the lyrics of their hit ‘Whatever It Takes’ to accompany the images and providing Russian translation for followers from her homeland.

The post earned rave reviews, with one fan wondering whether the 28-year-old was auditioning for the cast of icon TV series ‘Baywatch’, set on the California coast, albeit minus the famous red swimsuit.

Despite being forced out of competition for several months due to the Covid-19 shutdown, Efimova proved to fans that she is still in sensational shape, sharing a yoga pose last week which accentuated her form.

The Gozny-born Efimova is a six-time world champion and three-time Olympic medalist, scooping two silvers at the last Summer Games in Rio de Janeiro to add to the bronze she won in London four years earlier.

Despite having no Olympics to look forward to this summer, Efimova said she was still aiming for next year’s delayed Games in Japan but hinted at retirement after that.

“The main thing for me now is to keep swimming until Tokyo. I was planning for the Games being this year and keeping in shape.

“I don’t know if there’s a chance that I’ll continue after Toyko,” she said.

During the coronavirus shutdown Efimova amazed fans with her improvised home training routine, which included one exercise in which she suspended herself over a kitchen surface to practice her strokes.

🤔 How does an Olympian swimmer work out at home… with no swimming pool?

Her swimsuit offerings on social media have not gone unnoticed either, with the star revealing earlier this year that numerous sports stars had slid into her DMs in an attempt to get to know her better, including a mystery man from Italian football giants Juventus.

READ MORE: ‘I don’t want to give away any secrets but…’: Russian swimmer Efimova suggests mystery Juventus star was keen on hooking up

With Efimova’s latest beach images, it’s not hard to see why she’s catching the eye of more and more admirers around the world. 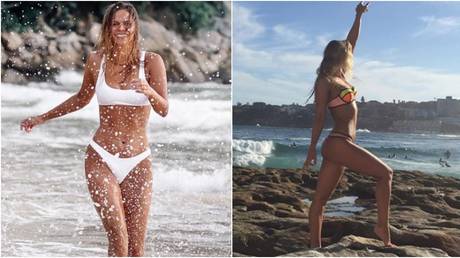 Android users can now check if the...