A figure skating powerhouse that has raised multiple world and Olympic champions, Russia continues to discover new talents, and Veronika Zhilina is one of the country’s most technically gifted finds in years.

The 12-year-old had pundits talking about her future prospects the moment she presented her newly acquired jumping skills during training sessions.

The slight-framed youngster, who moved to Evgeni Plushenko’s academy in May after splitting from Eteri Tutberidze, stunned skating experts with her talent, which has put her on a par with the likes of Alina Zagitova, Alexandra Trusova, and Alena Kostornaia, who revolutionized modern skating with their jaw-dropping jumps.

Following in the footsteps of her renowned predecessors, Zhilina effortlessly joined the so-called quad club by landing a quadruple Salchow last year when she was just 11. In doing so, she became the youngest female skater in the world to pull off the enormously difficult jump.

Having mastered that, she went on to successfully nail a quadruple toe loop and a triple Axel, establishing herself as one of the most technically gifted skaters of her generation.

But the young athlete didn’t stop there. After that, she raised the bar to an even more incredible level by learning how to execute a quad Lutz and landing a triple Axel in combination with a triple toe loop.

The video of her mind-blowing attempts was proudly shared by her new coach, Plushenko, who dubbed Zhilina “the youngest performer of the most difficult jumps.”

Having three quads and a triple Axel in her content, the skater could potentially dethrone Russia’s famed quad jumpers, who would look positively obscure in the light of Zhilina’s extraordinary progress.

In her favor, the newly emerged star has several years to polish and improve her skills still further, as she will only be allowed to take part in senior competitions when she turns 15. 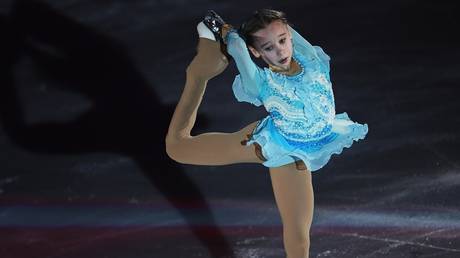