Russian figure skating champion Evgenia Medvedeva has led her fans to suspect she might have a new love affair, after she posted an enigmatic message on social media.

The 20-year-old shared a photo of herself holding a vast bouquet of red roses and a bunch of heart-shaped balloons topped with a teddy bear balloon – a romantic gift her followers guessed might be a present from an admirer.

The two-time world champion who is now training in Moscow, wrote “thank you” under the picture, causing a stir on her Instagram page, with followers making suggestions about precisely who the message was addressed to.

“Your favorite flowers and balloons. That’s love,” one person wrote.

“There are so many questions and no answers,” another user added.

“Hmm, seems somebody will have a romantic evening,” one more comment read.

“You’ve fallen in love and that’s amazing,” a fan wrote.

Medvedeva, who prefers to keep her private life out of the limelight and off social media, hasn’t replied to the avalanche of comments left on her Instagram page.

Last month, the skater revealed that her famous exhibition routine ‘Experience’ was inspired by the end of her first romantic relationship, which had broken her heart.

The Olympic silver medalist has been variously rumored to be dating Japanese superstar Yuzuru Hanyu and Bulgarian pop singer Kristian Kostov, but she didn’t confirm the reports that were circulating online and said they were both just friends.

The skater is getting ready for a new season in Russia and will join Orser in Toronto as soon as international flights resume. 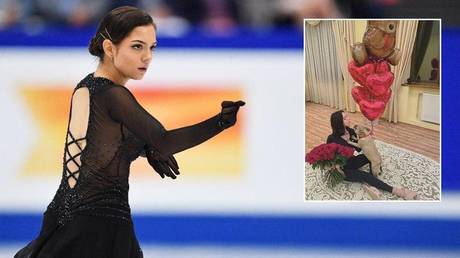