Tennis star Laura Siegemund caused a stir at the French Open again on Monday after she was seen eating a meal during a timeout in her win over Paula Badosa.

The German beat the Spaniard 7-5, 6-2 to reach her first Grand Slam quarterfinal, but the match will be best remembered for her eating habits on the sidelines.

While it’s a common sight to see tennis players chow down on a banana or a chocolate bar to give them a much-needed energy boost during a match, Siegemund took advantage of a medical timeout for Badosa to retrieve what appeared to be a large tub of noodles.

After using a fork to eat her meal, the 32-year-old munched on a cereal bar before play resumed.

Best use of your time when your opponent is receiving treatment 🥘 🍝 #RG20 #Siegemund pic.twitter.com/4IDUP9CCSv

Everyone is getting hungry now. #RG20 pic.twitter.com/kseKIa70oC

After the match, Siegemund explained to bemused umpire John Blom, who said he had never seen anything like that before: “I have really some problems with my stomach, so I couldn’t barely eat before.”

She also told the official that her meal was not a Chinese takeaway.

Umpire @Johnblom87 has seen a lot of stuff but not this. Siegemund explains. #RG20 pic.twitter.com/E3SGD149x4

Per BBC Sport, in her post-match press conference, Siegemund explained she made the decision after struggling to eat an energy bar:

“I couldn’t get it down really. So I asked my physio to bring me something else. I just wanted to get some carbs, some potato or rice, whatever.

“Probably looks weird having a fork and eating like that, but better than low sugar anyway.”

Siegemund enraged tennis fans in her first round clash with Kristina Mladenovic when she did not own up to a double-bounce at set point.

Her failure to report the double-bounce prompted accusations of cheating from fans.

Mladenovic, who was 5-1 up at the time but went onto lose 7-5, 6-3, was furious at umpire Eva Asderaki for missing the incident and called for the introduction of video replays on contentious points, although she said she “did not expect” Siegemund to have made the call herself.

Siegemund came from behind to beat compatriot Julia Gorges in the second round before doing the same against Petra Martic before her clash with Badosa. She’ll face no. 7 seed Petra Kvitova in the quarterfinal. 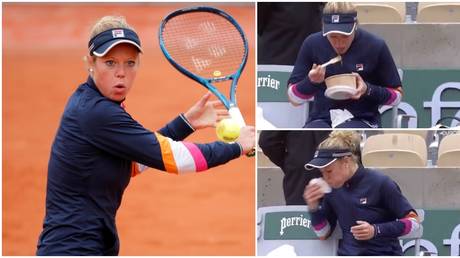