Close
Trending News
HomeSport‘Never seen anything like it’: Zepeda vs Baranchyk war ends with KO-of-year contender as Belarusian left in crumpled heap (VIDEO)

‘Never seen anything like it’: Zepeda vs Baranchyk war ends with KO-of-year contender as Belarusian left in crumpled heap (VIDEO)

‘Never seen anything like it’: Zepeda vs Baranchyk war ends with KO-of-year contender as Belarusian left in crumpled heap (VIDEO)

Jose Zepeda and Ivan Baranchyk produced a scrap for the ages as they went hell for leather in a five-round slugfest in Las Vegas which featured seven knockdowns before ending in a brutal KO-of-the-year contender.

Baranchyk sent Zepeda to the canvas twice in the first round of their junior welterweight title eliminator at the MGM Grand Conference Center in Las Vegas, setting the scene for a back-and-forth battle which saw the pair trade a further five knockdowns before the devastating conclusion in the closing stages of the fifth round.

Bouncing back from heavy right hand which had seen him propped up by the ropes and take a mandatory eight count, Zepeda drew on his reserves to land a concussive left uppercut on his opponent, crumpling Baranchyk to the canvas as his legs buckled disturbingly under him.

The Belarusian was left in a contorted heap for more than a minute but was eventually helped to his feet and managed to leave the ring under his own steam before being taken to hospital for observation.

“A piece of him was left in the ring tonight and he’ll never get it back.”@TimBradleyJr on the toll a fight like #ZepedaBaranchyk takes on the fighters. pic.twitter.com/UKlhFLEnp4

It was a suitably destructive denouement to a contest that was instantly hailed a fight-of-the-year contender – as well as calls for Zepeda’s thunderous uppercut to be crowned knockout of 2020.

“One of the best fights I’ve seen since Foreman-Lyle. Plain and simple,” Bob Arum, CEO of promoters Top Rank, who were putting on the contest, wrote in Twitter in reference to the classic heavyweight slugfest of 1976.

One of the best fights I’ve seen since Foreman-Lyle. Plain and simple. #ZepedaBaranchyk

“Fight of the Year and candidate for KO of the year… my goodness,” wrote pundit Robert Littal.

Fight of the Year and candidate for KO of the year from #ZepedaBaranchyk my goodness. Scary scene afterward but Baranchyk seems to be ok after not moving for a long time. he’s on his way to hospital pic.twitter.com/hqWggh20hD

“Scary scene afterward but Baranchyk seems to be OK after not moving for a long time. He’s on his way to the hospital.”

Zepeda had recovered from his two knockdowns inside the first round to send Baranchyk to the deck in the second round, but also paid a further visit to the canvas himself.

The Mexican-American sent his opponent down again in the third and fourth rounds, squaring the knockdown count at three apiece before he found himself in trouble against the ropes in the fifth.

But he got himself out of trouble in spectacular style, summing a crunching left uppercut which left Baranchyk out cold on the canvas.

US three-weight world champion Terence Crawford summed up the carnage, writing: “Never seen no sh*t like it.”

With his victory, Zepeda picked up his 33rd professional victory and 26th by way of KO.

Baranchyk, 27, fell to just the second defeat of his 22-fight pro career and was stopped for the first time. 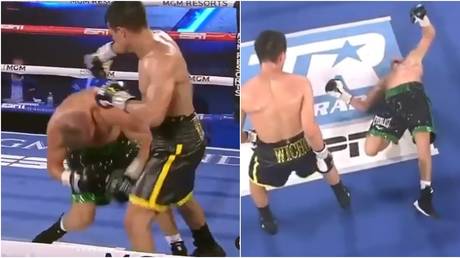