The Belarusian national sports team could be penalized by the International Olympic Committee (IOC), which is investigating allegations of political discrimination against athletes who don’t support President Alexander Lukashenko.

IOC head Thomas Bach voiced concerns over the situation after receiving multiple reports of alleged discrimination against athletes in the country for their political views.

The IOC, which is investigating the claims of unfair treatment and abuse of Belarusian athletes, has warned the country it might face severe sanctions if the allegations are proven to be true.

Banning the Belarusian national flag from the Tokyo Games is reportedly seen as one of the sanctions which could be imposed by the IOC.

“In the last couple of weeks, we have received various worrying reports through individual athletes’ letters and the media on the possible politically motivated interference by the National Olympic Committee or its member federations,” Bach said.

The Belarusian Olympic Committee – which is headed by Lukashenko – denied the allegations, outlining that athletes will be selected for next summer’s Games strictly in accordance with results displayed at major events.

Belarus has been engulfed by large-scale protests since the presidential election in August, which saw Lukashenko claim a sixth term with 80 percent of the vote. 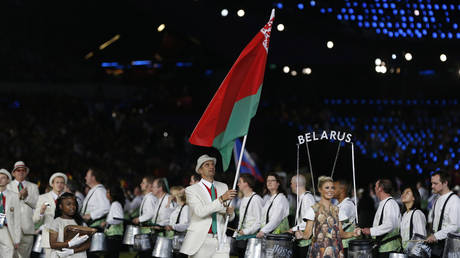