Houston Rockets star James Harden has sent Twitter users into convulsions after being pictured in a mask appearing to bear a ‘thin blue line’ symbol which signifies support for the police.

The Rockets’ official Twitter account shared the image of star guard Harden attending training inside the ‘NBA Bubble’ at Disney World in Orlando, Florida, as the league gears up for a restart after the Covid-19 hiatus.

“Mask Up,” read the caption accompanying the image.

The official NBA account also shared a picture of a masked Harden alongside an image of the star with his famous beard, this time uncovered.

But far from promoting health measures during the ongoing coronavirus pandemic, the images had the inadvertent effect of triggering an online backlash against Harden and the Rockets for the choice of mask.

The facial covering appeared to bear the ‘thin blue line’ image depicting support for the police, as well as the ‘Punisher Skull’ associated with the Marvel Comics vigilante character, which some have linked to far-right groups.

With the US in the grip of racial tensions following the death of George Floyd and the subsequent wave of Black Lives Matter protests, many pounced on Harden for his perceived pro-police stance.

“The ignorance on display here is bananas. James Harden and the @HoustonRockets social media team are either unwittingly spreading fascist iconography or willingly doing so. Either way this shit is trash,” raged one fan.

The ignorance on display here is bananas. James Harden and the @HoustonRockets social media team are either unwittingly spreading fascist iconography or willingly doing so. Either way this shit is trash.

“Please delete this. I really hope that mask ain’t what I think it is,” fumed another.

One Twitter user shared an image of the mask Harden appeared to be wearing, writing: “For the love of GOD tell me James Harden isn’t wearing a mask called ‘the blue patriot.'”

please delete this. i really hope that mask ain’t what I think it is

For the love of GOD tell me James Harden isn’t wearing a mask called “the blue patriot” pic.twitter.com/nSf1Vu4ig9

But others leapt to the defense of the eight-time NBA All-Star, hailing him for his support of US police forces while protesting his right to an opinion and freedom of expression.

Thank you for backing the blue

We’re a Haitian family & My brother is a police officer. He goes out everyday trying to help others.

With companies/celebs siding w/ Marxists pushing a cop hating agenda, it’s nice to see a company/celeb stand up to this cultural Marxist mov. 👍🏾💯

No reason for this to get deleted. One can support bringing awareness to racial inequality while also backing the blue. Nothing offensive whatsoever.

It’s unclear whether Harden was even aware of any supposed symbolism behind the mask, as rapper friend Young Thug claimed the NBA star does not have the internet so doesn’t “know what’s right or wrong if he posted something that’s against US.”

Further confusing the matter, Harden had spoken earlier on Thursday about the Black Lives Matter protests in Houston, calling them “amazing.”

James Harden on how Houston handled the protests for the late George Floyd:”The way the city rallied,it was amazing.I think the world saw it. How so many people could come together..Obviously it was for a tragic reason.The marching&everything we’re standing for is very powerful” pic.twitter.com/7NTkL90l2D

When the NBA season does restart at the end of July, courts at the Disney World Resort where games will be played will reportedly be emblazoned with the words ‘Black Lives Matter’. 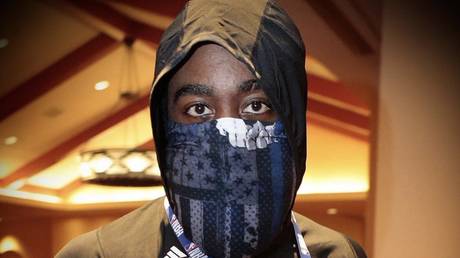