The NBA has put several playoff games on hold after the Milwaukee Bucks chose to boycott a bout with the Orlando Magic to protest the police shooting of Jacob Blake, as players on a number of other teams say they may follow suit.

The league said it would reschedule three playoff matches on Wednesday after the Bucks refused to take the court in a show of solidarity with those protesting Blake’s shooting in Wisconsin last weekend. In addition to the Bucks-Magic game, two other matches – the Houston Rockets v the Oklahoma City Thunder, and the LA Lakers v the Portland Trail Blazers – have also been postponed.

“In light of the Milwaukee Bucks’ decision to not take the floor today for Game 5 against the Orlando Magic, today’s three games… have been postponed. Game 5 of each series will be rescheduled,” the NBA announced in a tweet.

The NBA and the NBPA today announced that in light of the Milwaukee Bucks’ decision to not take the floor today for Game 5 against the Orlando Magic, today’s three games – MIL-ORL, HOU-OKC and LAL-POR have been postponed. Game 5 of each series will be rescheduled.

Bucks point guard George Hill said the team declined to play the match because they are “tired of the killings and injustice,” while coach Mike Budenholzer cited players’ wishes to see “change.” The gesture has prompted athletes on other teams to consider their own boycotts, including the Boston Celtics and the Toronto Raptors, as well as Thunder and the Rockets, according to a number of reports. Celtics coach Brad Stevens said on Wednesday that the team had not yet indicated a desire to sit out, but some players have noted that the discussion is ongoing.

“Obviously, if we sit out a game or the rest of the playoffs, we understand how big of an impact that will have,” said Celtics wing Jayson Tatum. “Everybody’s going to have to talk about it. We don’t want to just keep playing and forget about what’s going on in the outside world because it’s affecting us. It’s affecting everybody.”

The National Basketball Players Association, the labor union representing NBA athletes, voiced strong support for the boycotts, saying “we stand with our players” in a tweet, which also declared “the revolution will be televised” alongside a clenched ‘power’ fist.

Blake’s shooting has made waves beyond the world of basketball, inspiring the Detroit Lions football team to cancel practice on Tuesday in protest, while stoking rumors that other leagues could soon join them. Though sports journalist Thomas Drance reported that the National Hockey League (NHL) would play its two games scheduled on Wednesday amid talk that hockey could also see boycotts, the Milwaukee Brewers, a Major League Baseball franchise, have refused to take the field for their own matchup against the Cincinnati Reds.

As I just reported on @TSN1040, checked in with league sources and I’d expect that as of right now the 2 scheduled NHL games this evening (TB vs. BOS, DAL vs. COL) will be played.

The NBA has postponed 3 scheduled playoff games this evening, a reaction to player boycotts.

The Brewers have decided not to play tonight’s game.

Since returning from its four-month hiatus due to the coronavirus outbreak, the NBA has seen a sharp rise in political discussion surrounding racism and police brutality both on and off the court, with players appending slogans to their jerseys and kneeling during the national anthem, among other things. While a number of players, teams and coaches have come out in support of the gestures of protest, fans have been more divided – some backing the boycotts, while others insist politics be kept out of sports.

I’m down with what they are protesting for but seriously what does this do?

That’s it. I will no longer be watching the NBA. The fact that they can’t play the game without being political is astounding. I refuse to support an organization that promotes communist propaganda, absolutely embarrassing! @NBA

All Black players should COMPLETELY boycott the game until we get justice!
A postponement is similar to “investigation undergoing” .. Nothing comes out of it. 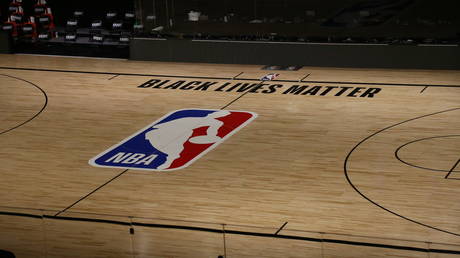 Life in prison with NO chance of p...