Speaking on a conservative radio show in the U.S., Trump called in and took aim at James in an angry rant.

“LeBron is a spokesman for the Democratic Party and a very nasty spokesman,” he said.

“Because, again, I’ve done so much for the Black community and people don’t wanna see that.

“We have enough difficulty during the week. You don’t want to sit down watching a basketball game and then watch somebody that hates your guts, OK? He’s a hater.“

Trump also labeled the Black Lives Matter movement as a “Marxist” organization and said even the organization’s title was racist, as it creates division between Black people and other races.

Earlier in the week, James had taken to social media to mock vice president Mike Pence after a fly landed on his head during his debate with Kamala Harris.

“Ya’ll know what flies favorite destination is right??!!” he said at the time.

James also labeled President Trump a “bum” after he withdrew a White House invitation from NBA champion Golden State Warriors, and also stated that nobody in the basketball community would lose any sleep if Trump stopped watching the game.

“I really don’t think the basketball community is sad about losing his viewership,” he said. 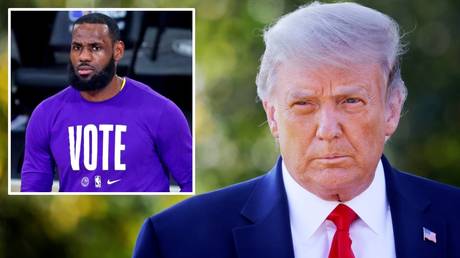