Ronda Rousey has made a career out of being one of the toughest women on the planet, but the former UFC champion was reduced to tears by hot wings during a special interview for YouTube channel “First We Feast.”

Rousey shared some of the highlights, and low points, of her career inside and outside of the cage during the interview, which was conducted while she tested a variety of hot wing sauces.

The interview started out well enough, with Rousey enjoying the early spice while sharing amusing anecdotes from through her career in sports and entertainment.

But as the level of heat began to rise toward the end of the test, the former Olympic judo medalist, Strikeforce and UFC champion and WWE women’s champion started to struggle.

When Rousey tried the sauce named “Da Bomb Beyond Insanity,” things really started to heat up.

“I immediately felt it in my nose!” she said.

“It actually burns my stomach and my nose and my throat at the same time. I licked my own lips and it hurt!”

With her eyes starting to water, Rousey gradually became more uncomfortable as things got a little too hot to handle.

“My tears are burning my face!” she said.

“I feel like the hot sauce went in my nose, I sniffed it up, it went into my tear duct, and it is coming out, burning my face!”

Rousey revealed that hot wings were a big part of her sporting career during the peak of her fighting prime in the UFC, as she used the excitement and anticipation of enjoying a pile of hot wings as motivation to get through training camp.

“When I was in training camp for fights I would always crave hot wings. They just became associated with victory and happiness, the post-victory wing. … I have the happiest memories with hot wings!”

But, while Rousey seemed to enjoy her taste-test experience, she did warn that her husband, former UFC heavyweight Travis Browne, was likely to suffer the after-effects later that evening.

“Dude! Poor Travis is going to have to deal with the hottest farts in marriage tonight! Oh man!” 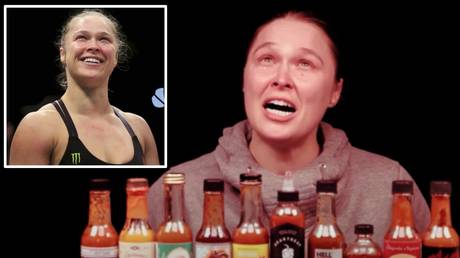