‘My performance would be compromised’: Georges St-Pierre shoots down chances of Khabib fight at lightweight

‘My performance would be compromised’: Georges St-Pierre shoots down chances of Khabib fight at lightweight

UFC legend Georges St-Pierre has pulled the brakes on a potential showdown with champion Khabib Nurmagomedov, at least at lightweight, saying he couldn’t make the cut to 155lbs without ‘compromising’ his performance.

Russian champion Nurmagomedov has hinted in recent media interviews that he is considering calling a halt to his record-breaking mixed martial arts career once he reaches the 30-0 mark in professional competition – a record which would surpass that of practically any UFC champion to have come before him.

With his record currently standing at 28-0, Khabib already has his next challenge laid out in front of him. On October 24, he will fight the interim UFC lightweight champion, Justin Gaethje, in a fight expected to take place in Las Vegas or Abu Dhabi, but after that Nurmagomedov has outlined that he would like his final fight to come against another of the sport’s greats.

“If (St-Pierre) comes back to the UFC and agrees to fight me, I’m fighting him,” he said earlier this month.

“Why? Because the last time he lost was 2007. My career started in 2008. Together we’ve been undefeated for 25 years. I’m talking in terms of time, not fights.

“I don’t think the UFC will get another chance to make a fight like that, definitely not in the next 10 years. So, Georges St-Pierre is next. If not, then let Conor (McGregor) beat (Dustin) Poirier or have Tony beat him, then I’ll fight them.”

However, it seems that the other side of the equation isn’t quite so keen. St-Pierre announced his second retirement from the sport shortly after defeating Michael Bisping to claim the UFC’s middleweight title in late 2017 to officially end a career which saw him claim titles in two separate weight classes and establish himself as one of the most respected fighters to have ever stepped into the octagon.

‘GSP’ subsequently teased the idea of a comeback fight against Nurmagomedov, but has since cooled on the idea after determining that his body might not react well to the rigors of cutting to the lightweight limit – and nor does he think that the UFC want to place him in a position to win the belt, and once again retire.

“I feel I’m at my best, but, the fight is always the last one to find out when your time is up. And, I don’t know, it takes three parties to make a fight. It takes one opponent, another opponent, and takes the organization as well,” St-Pierre told BT Sport.

“Khabib is fighting at 155, but I believe he’s heavier than me. He walks around a heavier weight. He’s younger than me, so he can fluctuate his weight better.”

St-Pierre did assert, however, that Khabib is “right now the best fighter on the face of the earth,” leaving fans with just enough lingering hope of a showdown between the pair – just not at lightweight. 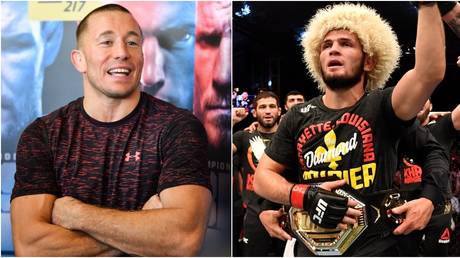 'I could have starved for day...