UFC bombshell Paige VanZant has told her millions of followers that her “sun will rise” and she will “try again” – but her UFC future is in serious doubt after comments by president Dana White following her defeat to Amanda Ribas.

VanZant lasted less than a round before being submitted by flyweight rival Ribas in the final fight of her current deal at UFC 251, earning a brutal assessment by championship president White that has left the octagon future of one of the most high-profile figures in women’s MMA looking uncertain.

The 26-year-old has had a metal plate inserted in a broken arm after breaking it three times in recent years and had been outspoken in speaking of the sacrifices she had made and calling for a pay rise before her swift defeat to Ribas, having previously admitted that she made more money from her celebrity status than she did from her fighting career.

“The sun will rise and we will rise again,” VanZant announced as she showed herself relaxing in her “happy place” at the Oregon home she shares with her husband, Bellator fighter Austin Vanderford.

White compared VanZant to UFC heavyweight Curtis Blaydes as an example of a fighter who has demanded more from the UFC without delivering in fights.

“I like Paige,” he began in the post-event press conference.

“When you talk all that stuff, ‘I’m not being paid enough,’ and fighting inconsistently, one time in the last year, injuries, and then got smoked in the first round of the fight, she should definitely test free agency.”

VanZant has won five of her nine UFC contests but is known more widely for appearing on US reality shows including Dancing with the Stars, as well as building an Instagram following of more than 2.6 million through frequent posts that included a series of near-naked portraits with her husband earlier this year.

While supporters, including former UFC strawweight Pearl Gonzalez and Dancing with the Stars professional dancer Sasha Farber, showed their admiration for VanZant, some fans said she should pursue other career options.

“Paige is a talented lady but fighting is not for her,” said one.

“There are other things she can do which she can excel at.

“She still got to fight on the big stage. That is life. You try and move on.”

Another added: “See you in Bellator.” 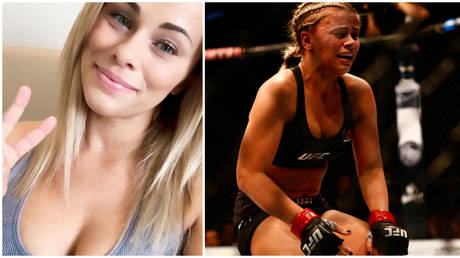