With all of the excited talk around the sport regarding the possible comeback of Khabib Nurmagomedov, the UFC star’s coach urged people to pump the brakes just a little.

Head coach of the American Kickboxing Academy in San Jose, California, Javier Mendez, has taken on head coach duties with Khabib following the untimely death of his father and coach, Abdulmanap, last year.

And the former kickboxing star-turned-MMA coach said that he agreed with Khabib’s assertion that he would need to have a special fight in front of him to coax him out of retirement.

But he also made a crucial point – he’d need to get his mother’s permission first.

“I agree (it has to be a special fight for him to come back). But we also have to remember one thing: he has to get his mother’s permission too,” Mendez told RT Sport in Abu Dhabi.

“Mother’s plan. She has to approve. He can say ‘yes,’ but he has to follow mother.

“He said, ‘I promised mother.’ Well, she hasn’t given permission, as far as I’m concerned. The great person that he is, if he decides to come back and feels someone is worthy, he’s going to have to ask mother, too.”

Of course, talk of Khabib’s possible return has reignited the hype surrounding a potential rematch against Conor McGregor and, with both men currently in Abu Dhabi, Mendez said the UFC would be well advised to keep the two heated rivals well apart.

“I would think they (the UFC) would try to avoid (a meeting), that would be smart,” he said.

“I think 100 percent it makes sense to avoid those meetings… Conor as a fighter is fantastic, one of the best I’ve ever seen, but as a person I don’t like him, I don’t like what he does, speaking about country, religion and family. I don’t think they should ever come into play for the fight game. Talk trash, but leave all the other stuff alone.

“He did his research and attacked all those things, it’s kind of hard to forgive that. It’s not all business, we’re talking family here, religion and country. It’s hard on people. That’s why I certainly don’t care for him, I don’t hate him, but I don’t particularly care for him.”

McGregor, meanwhile, has attempted to claim that Khabib was never actually crowned UFC lightweight champion, just because his win over the Irishman was never officially announced in the octagon.

“I am the champion,” he told ESPN.

“Khabib fled the cage and left me fighting with his family members in the cage. The post-fight ceremony never took place.” 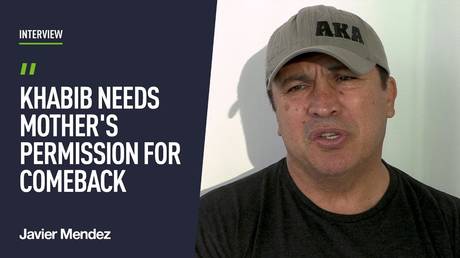 In the shadow of The Eagle: UFC ma...