Close
Trending News
HomeSport‘More out of the club than in it’: Messi tells Koeman he is more likely to LEAVE Barcelona – reports

‘More out of the club than in it’: Messi tells Koeman he is more likely to LEAVE Barcelona – reports

‘More out of the club than in it’: Messi tells Koeman he is more likely to LEAVE Barcelona – reports

Lionel Messi has told new Barcelona boss Ronald Koeman that he is more likely to leave the club than remain as the pair met for crunch talks on Thursday, according to reports in Spain.

Messi’s future at the Nou Camp is the subject of intense speculation after Barcelona’s humiliating 8-2 defeat to Bayern Munich in the Champions League quarterfinals last week.

That capped a disappointing season in which the Catalans also relinquished their hold on the La Liga title to rivals Real Madrid.

Manager Quique Setien has already paid the price, being sacked by the Barca hierarchy and replaced by Dutch former player Koeman, while sporting director Eric Abidal also left his position this week.

Messi is believed to have cut short his holiday to meet with Koeman to discuss his future, although initial reports in the Spanish press on the discussions will not make happy reading for the Barcelona faithful.

According to AS, citing local radio station RAC1, Messi indicated to Koeman that he most likely sees his future away from the Nou Camp, telling him that he is “more out of the club than in it.”

The Argentine, 33, reportedly accepted however that it would not be straightforward to walk away from the Nou Camp, given that he is under contract there until next summer.

Koeman, for his part, announced on his arrival that Messi would be integral to his plans as he seeks to rebuild Barca from the rubble of a disastrous season.

The news from Thursday’s meeting will put a number of Europe’s top clubs on even higher alert, should they sense a chance to swoop in for the six-time Ballon d’Or winner. 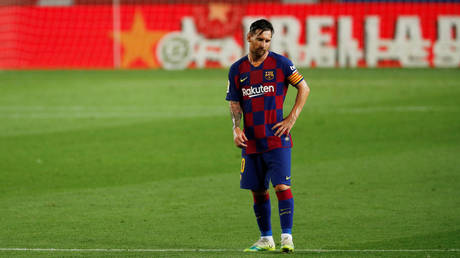 Arms in the air? UAE-Israel peace...