Russian rhythmic gymnastics champion Aleksandra Soldatova decided to hold an impromptu training session while out in Moscow, and shared some pics of her regimen with her Instagram followers.

The four-time world gold medalist proudly demonstrated her flexibility and insane stretching by going through a gymnastics routine right on the bank of the Moskva river.

READ MORE: ‘They spent 3 hours with me’: Russian gymnastics star Soldatova opens up on drugs test after early-morning visit by inspectors

“Training time: mixing business with pleasure,” Soldatova wrote as she shared the pictures from her walk on her Instagram page.

The gymnast put her competitive career on hold last year due to serious health problems after she revealed that she has been struggling with the eating disorder bulimia for the past two seasons.

Despite dealing with personal obstacles, Soldatova hopes to recover from the illness and earn one of the two qualification spots to represent Russia at the Tokyo Olympic Games next summer.

The athlete, who has more than 440,000 followers, often shows off her mind-blowing gymnastic moves by sharing clips on social media. 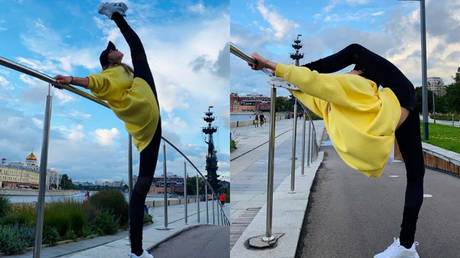 ‘You’re being used as cannon fodde...