As Moscow put on its finest pomp and ceremony in Wednesday’s Victory Day Parade, one man reveling in the show was boxing great Roy Jones Jr. – who had one of the best seats on Red Square to watch the spectacle.

The Russian capital held its 75th anniversary Victory Day Parade this week, an event pushed back from its traditional May 9 slot due to the Covid-19 pandemic.

Those in attendance for the rearranged show were treated to glorious sunshine and the usual flexing of Russia’s military might, as the nation also paid tribute to the millions who fell in the battle against Nazi forces.

As the military hardware rolled across the cobbled stones of Moscow’s historic center, accompanied by the steps of around 14,000 soldiers, one man with the perfect vantage point was boxing great Jones.

The Florida-born fighter, 51, is a consensus legend of the sport, winning world titles from middleweight to heavyweight during a 75-fight pro career which he began a year after representing the USA at the 1988 Olympics.

Some fans may have wondered what Jones was doing seated in the stands beside the famous red-brick Kremlin walls, although his presence can easily be explained as he received a Russian passport in 2015 from President Vladimir Putin.

Jones clearly enjoyed the big day, sharing footage and pictures of the experience with his 430,000 Instagram followers.

Video clips and photos showed military vehicles thundering past as well as a marching band, and even a close-up shot of President Putin, while Jones was dressed for the occasion with military headgear.

Later in the day Jones shared an image alongside another star in the form of Hollywood actor Steven Seagal, who also holds Russian citizenship.

Speaking to RT Sport last August ahead of the WBO world title fight between Sergey Kovalev and Anthony Yarde in Chelyabinsk, Jones said he feels “very Russian” and is very much at home in his second motherland.

“I feel very Russian. Because of the love and the respect and the whole [aura] about the situation,” he said after performing a hip-hop set at the event. 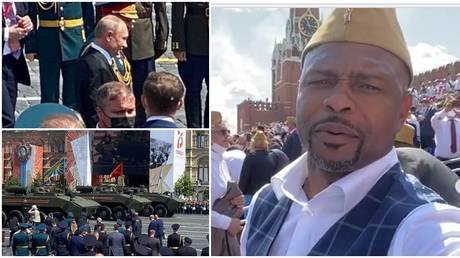