Players from the Wisconsin NBA franchise the Milwaukee Bucks have agreed to boycott the fifth game in their playoff series against the Orlando Magic, citing the recent police shooting of an African-American man in nearby Kenosha.

Magic players showed up on the court on Wednesday afternoon, trailing the Bucks 3-1 in the series, but the opposing team was nowhere to be seen. Multiple sports reporters said the players decided just before tipoff not to leave the locker room.

Wearing a ‘Coaches for racial justice’ T-shirt, Bucks’ coach Mike Budenholzer said it was “a great challenge… to go out and play a game” when one wants “something different and better” for Kenosha, Milwaukee and Wisconsin.

“It is a great challenge to have an appreciation and a desire to want change. To want something different and better in Kenosha, Milwaukee and Wisconsin and then to go out and play a game.” pic.twitter.com/BCmHZdFf1P

The gesture comes three days after police in Kenosha – a city of some 100,000 residents south of Milwaukee – shot and seriously injured Blake, a 29-year-old African American during an altercation. Protests against the incident quickly became violent, as rioters set fire to a number of buildings and shops.

The Bucks were universally hailed by sports journalists and many basketball personalities over their boycott. Scottie Pippen, the legendary Chicago Bulls player who retired in 2005, saluted the team with a tweet saying “Black Power.”

Nothing but respect for Milwaukee’s players and coaches. #BlackLivesMatter

Reporters have also pointed out that police brutality is a personal issue for the Bucks, whose teammate Sterling Brown was tased during his arrest for a parking violation in January 2018.

One of the officers involved in the incident was later fired by the Milwaukee PD for “racist” and “derogatory” social media posts.

There have also been reports that other teams intend to follow suit, specifically the Boston Celtics and Toronto Raptors, scheduled to play later on Wednesday.

Two people have been killed in the Kenosha unrest sparked by Blake’s shooting, after rioters clashed with armed militia on Tuesday night. State and local authorities have previously rejected federal assistance to restore order, deploying only a few hundred National Guard troops to protect state property. They reversed course on Wednesday, accepting President Donald Trump’s offer of federal agents to bring the situation under control. 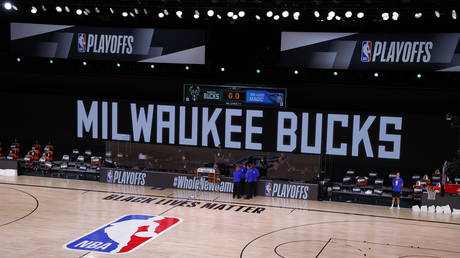