Milica Mandic is a stunning Serbian taekwondo expert who has set hearts racing at the Tokyo 2020 Olympics by achieving a gold medal in the +67 kgs division of the competition, but this isn’t her first rodeo at the Games.

Achieving gold in London in 2012, Mandic is now a double champion in the world’s flagship tournament after beating Lee Da-Bin in the final on Tuesday afternoon.

This is all the more impressive considering that the martial art was invented in Da-Bin’s country South Korea, who had won at least one gold in the discipline since it became an Olympic Sport in Sydney in 2000.

“I was ready for it,” Mandic said post-victory.

“Rio was very hard for me [in 2016] – I wanted it so much but did not get the result,” she revealed, in reference to her quarterfinal exit.

“This time I had years to qualify and the dream came true.”

Born in Belgrade in December 1991, when the Serbian city still formed part of the former Yugoslavia, Mandic came to prominence when she won a bronze at the 2011 World Taekwondo Championships in Gyeongju, South Korea.

A silver at the 2012 European Taekwondo Championships represented further progress, but then she made history by becoming an independent Serbia’s first ever gold medalist in London when beating France’s Anne-Caroline Graffe 9-7 in the final.

For this, she was inducted into Taekwondo’s Hall of Fame in Las Vegas in 2013 alongside her coach Dragan Jovic for their contribution to the sport in her Eastern European homeland.

As mentioned, a quarterfinal exit at the hands of Brit Bianca Walkden – who won bronze this time round in Tokyo – meant she was unable to defend her crown in Rio in 2016.

But Mandic was soon back to her best with a gold win at the 2017 World Taekwondo Championships in Muju South Korea, where she topped local combatant Oh Hye-ri.

In April last year, as the pandemic took off, she announced that this Olympics would be her last, and can now retire in perfect fashion after leaving a permanent mark on her favorite hobby-turned-profession.

And in bad news for those already smitten with the 5ft 11 beauty, her post-competition years will probably be spent alongside the long-term partner she regularly posts pictures with for her 63,300 followers on Instagram. 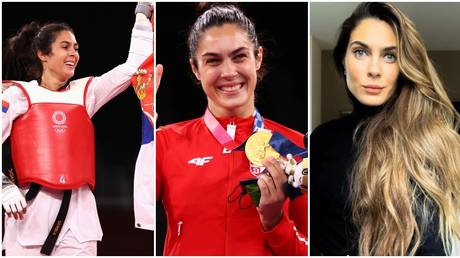