‘Milan NEVER had a king’: Zlatan declares he’s GOD in attack on ace Lukaku after recovering from coronavirus for Italian derby win

‘Milan NEVER had a king’: Zlatan declares he’s GOD in attack on ace Lukaku after recovering from coronavirus for Italian derby win

Zlatan Ibrahimovic has finally taken his chance to hit back at fellow striker Romelu Lukaku in an exchange of taunts on social media, dismissing the Inter Milan forward’s claim to be “king” of the city by calling himself god.

AC Milan forward Ibrahimovic had bided his time to reply to Lukaku’s thinly-veiled barb following Inter’s thrilling 4-2 win at home to Milan in February, when the Sweden legend scored one of the goals as the visitors took a surprise 2-0 win.

Lukaku scored a last-gasp goal to cap a dismal second half for Ibrahimovic and Milan, who were well below their title-challenging arch-rivals at the time.

Ibrahimovic, who had just joined rejoined struggling Milan, would have been infuriated by Lukaku’s subsequent description of himself as the “new king in town” – a reference to Ibrahimovic’s wish to be known as the “king of Milan” when he was with the Rossoneri between 2010 and 2012.

Following a hugely promising second half of last season that was inspired by veteran Ibrahimovic’s goals, Milan are now top of the table and the only club to have won all four of their league matches, having triumphed 2-1 at the San Siro stadium both clubs share on Saturday.

Ibrahimovic, who had only just returned from a period of isolation following a positive test for Covid-19, scored twice in four minutes to put Milan 2-0 up after 16 minutes.

Belgium striker Lukaku replied after 29 minutes to give Inter hope of the kind of comeback they had enjoyed when the fixture last took place, but Ibrahimovic has been able to gloat after Milan held on to move five points ahead of Inter.

“Milano never had a king,” the irrepressible 39-year-old announced to his following of almost 45 million on Instagram, adding a photo of himself celebrating with his teammates the previous night. “They have a GOD.”

Replying to a star who has never been noted for his modesty, one fan joked: “Hi Zlatan – sorry, but I’m worried about your self-esteem.”

Ibrahimovic and Lukaku are among the top scorers with a fraction of the season gone, netting four times to put them both one ahead of Juventus striker Cristiano Ronaldo.

“I was stuck at home for two weeks so I was hungry and it showed.

“I lost my sense of taste a little bit but I had a swab every three days and nobody was going to stop me playing the derby.

“I am the oldest in the squad, I feel a lot of responsibility and I like that feeling. They all follow my lead and are hungry to win.”

Milan remain outsiders to win the Scudetto, with reigning champions Juve favorites and Inter considered the most likely to deny Ronaldo the league title.

“When I arrived, the objective was qualifying for Europe and we did it,” Ibrahimovic said.

“I do think the Scudetto is a possibility because if you believe, then you can achieve anything. There’s a long way to go, though.” 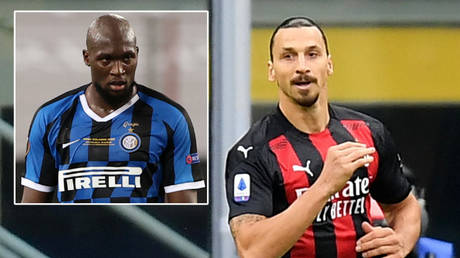