Mesut Ozil has offered to save Arsenal mascot Gunnersaurus’ job by paying his wages after he was sacked by the club after 27 years on Monday, but some fans have accused the German of playing “mind games” with the Gunners.

It was reported on Monday that Jerry Quy, who had played the role of Gunnersaurus since its inception in 1993, was let go by Arsenal as they continue to make layoffs due to the impact the Covid-19 pandemic has had on the club’s finances, much to the outrage of their fans.

On Tuesday, Ozil – the club’s top earner on £350,000 ($455,000) per week – wrote on social media: “I was so sad that Jerry Quy aka our famous & loyal mascot Gunnersaurus and integral part of our club was being made redundant after 27 years.

“As such, I’m offering to reimburse Arsenal with the full salary of our big green guy as long as I will be an Arsenal player so Jerry can continue his job that he loves so much.”

While many were quick to react in praising the No. 10 for his charitable act, others felt it was a thinly veiled attempt at getting back at Arsenal.

“Mind games player against the Arsenal board,” wrote one fan. “£350pkw to play chess.”

“This is so passive aggressive to the club. I love it,” added another.

Mesut Ozil – mind games player against the Arsenal board. 350pkw to play chess.

This is so passive aggressive to the club. I love it. pic.twitter.com/WRwewUNSs9

Others felt Gunnersaurus may not have found himself in such a situation had Ozil agreed to a reduction in pay earlier in the year like many of his teammates.

“[It’s the least you can do from been paid for doing nothing, I’m sure if you had agreed to a pay cut he would still have his job,” one angry supporter responded.

“Özil still earning 350K per week while Gunnersaurus loses his job. Arsenal are worried about the wrong dinosaur,” wrote another, although before the playmaker had even made his offer.

The least you can do from been paid for doing nothing,I’m sure if you had agreed to a pay cut he would still have his job

Özil still earning 350K per week while Gunnersaurus loses his job. Arsenal are worried about the wrong dinosaur

Many responded positively to the gesture, though, including one Twitter user who wrote: “Some things are bigger than football and this is why I’ll never be able to hate on this guy no matter what he does… what a class act Mesut.”

Another added: “Class from Ozil. Keep up the good work as always bro.”

In April, many Arsenal players and staff agreed to a 12.5 percent pay cut for a year, although it was subsequently reduced to 7.5 percent after when the team won the FA Cup and secured UEFA Europa League football in the process.

Ozil was heavily criticized for refusing to accept the cut, and the 31-year-old has been notable by his absence in recent months. He last played for Arsenal in March and has not even made the bench since June.

The former Real Madrid man defended his decision, telling The Athletic that players were “rushed into it” without all the necessary information, including what the money saved by the club through the pay cuts would be used for.

His concerns appeared to be well-founded when Arsenal announced in August they would make 55 staff members – not including Quy – redundant despite the cost-cutting measures.

The club spent almost £80 million in transfer fees this summer, the bulk of it on deadline-day arrival Thomas Partey, as well as offering bumper deals to keep Pierre-Emerick Aubameyang at the club and snap up free agent Willian following his departure from Chelsea. 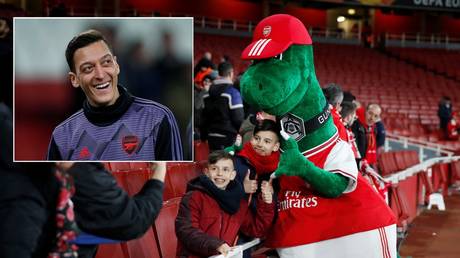