A multimillionaire outcast and a dinosaur mascot in danger of extinction might seem like a strange pair for a footballing fable, but the tale of Mesut Ozil and Arsenal talisman Gunnersaurus says much about the state of the game.

Arsenal fans began the week with reports that Jerry Quy, the man who has played the role of beloved mascot Gunnersaurus for 27 years, was being let go by the club as they continue to cut costs in the midst of the financial devastation caused by Covid-19.

Gunnersaurus – an ever-present Gooner for almost three decades – was to be a goner.

Fans reacted with genuine distress at the news.

Piers Morgan, predictably, waded in to express his disgust, while Gunnersaurus received messages of support from as far and wide as Zenit St. Petersburg in the north of Russia to Sevilla in the south of Spain.

But just as fans feared for the jolly green giant’s future, in stepped Arsenal playmaker Mesut Ozil – the club’s top earner on £350,000 ($450,000) a week – who generously offered to save the doomed dino.

“I was so sad that Jerry Quy aka our famous & loyal mascot Gunnersaurus and integral part of our club was being made redundant after 27 years,” Ozil wrote to his 22 million followers on Instagram.

“As such, I’m offering to reimburse Arsenal with the full salary of our big green guy as long as I will be an Arsenal player so Jerry can continue his job that he loves so much.”

Arsenal have yet to give official word on the offer, but the gesture from Ozil was greeted with widespread praise on ‘Football Twitter’ – usually that most toxically tribal of digital arenas.

The more savvy observers, though, paused and wondered whether this wasn’t, in fact, a flex by Ozil to get one over on the Arsenal board as the German World Cup winner counts down the months until his contract ends next summer.

This is, after all, a man who has again been frozen out of the team, with lingering questions over his commitment and ability to adapt to the kind of intense style favored under manager Mikel Arteta.

Perhaps it was a gesture of magnanimity from one Arsenal outcast, Ozil, to another in the form of Gunnersaurus?

In financial terms, however, the two Arsenal employees are much, much further apart.

Unable to offload the 31-year-old Ozil due to his colossal wage demands, Arsenal are stuck with a player who continues to pick up a six-figure salary each week but has not played a single minute of competitive football since March.

Indeed, Ozil continues to receive his full salary having refused a pay cut when Covid-19 first struck, saying he felt the discussions over the step were “rushed.”

His returns have dwindled on the pitch ever since he signed a lucrative extension to his contract in 2018.

While his defenders will point to injury niggles holding him back or a lack of fair chances under successive Arsenal managers, it’s hard to mask Ozil’s alarming decline from a star who was once among the most gifted playmakers on the planet to an unused substitute shading himself under an umbrella on the bench (assuming he makes Arteta’s squad at all).

As one particularly scathing tweet mocked, maybe Arsenal were getting rid of ‘the wrong dinosaur’ when they went for Gunnersaurus.

Özil still earning 350K per week while Gunnersaurus loses his job. Arsenal are worried about the wrong dinosaur

As Ozil continues to weigh down the books, Arsenal continue to look for ways to cut costs elsewhere.

Even before the news that Gunnersaurus was getting the boot, the club had announced plans to lay off 55 staff – a decision which earned opprobrium from fans, former players and pundits alike.

Not that the current ‘crisis’ stopped the Gunners and their US ownership from digging deep during the transfer window, as they brought in Thomas Partey from Atletico Madrid in a last-ditch deal which, all told, could end up costing them in the region of €100 million.

In that context, laying off their mascot seems even more brutal.

The Gunners’ expenditure was in fact part of a summer splurge from Premier League clubs of more than £1 billion ($1.29 billion) before the transfer window shut this week.

Much of that spending was from clubs and individuals – such as Tottenham chairman Daniel Levy – who brought us sob stories at the outset of the pandemic in March that things would be as tight for the footballing elite as for the rest of us during the Covid fallout.

Just like Gunnersaurus, professional clubs in England’s League One and League Two (the country’s third and fourth tiers) and many below that level will fear extinction if they are not given urgent financial assistance.

Not engorged by television money, these are clubs that rely far more heavily on match-day revenues which have dried up while games continue to be played behind closed doors.

English Football League (EFL) teams have gone cap-in-hand to the Premier League in the hope of a bailout from their wealthier brethren, but the rumors are that any aid will come begrudgingly and with strings attached.

Even under government pressure, Premier League bosses will plead their own poverty, or assert that they are being picked on as victims of their own success for becoming such a sellable product which attracts so much interest – and money – at home and abroad. Why should they pay for those down the pyramid when no other industry is doing the same? That’s how the argument will go.

But football – just like society – really must be broken if during a time of famine those at the top table continue to feast, and what’s worse are reluctant to throw even the skinniest of bones to those who look up enviously from the ground below them.

The curious case of Mesut Ozil and Gunnersaurus is a small part of this bigger, grossly distorted picture.

On one side a player who continues to pocket millions of pounds a year (and now for very little exertion), and on the other a man whose job was endangered by the club who agreed to pay Ozil his obscene earnings, and who have continued to splash the cash on big-money signings as the pandemic rages on.

To his credit, Ozil has at least shown the good grace to offer assistance to the man in the Gunnersaurus suit.

But the fact that he has to do so is a damning indictment of the inequality rife in so much of modern football. 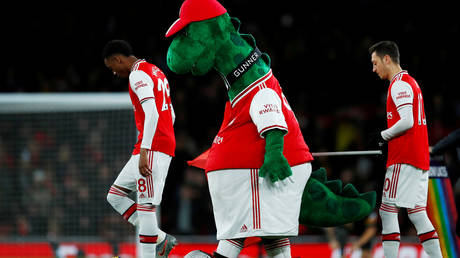