Lionel Messi is seeking a meeting with the Barcelona top brass to avoid an ugly and protracted exit from the club, according to reports. The Argentine is, however, still intent on leaving the club this summer.

Messi stunned the footballing world this week when he informed the Barcelona hierarchy that he wanted to leave this summer.

The 33-year-old asserted that he could walk away for free, citing a disputed contract clause which the club insists has already expired.

Instead, Barcelona bosses claim Messi remains tied to the club until the summer of 2021, with an official release clause of €700 million ($830 million).

Beleaguered Barcelona president Josep Maria Bartomeu has reportedly said he is willing to step down should Messi publicly state he will remain at the club, although many have taken that to be a bluff.

As both sides stick to their guns over the disputed contract clause, Messi is said to have told his representatives to set up a meeting with the Barcelona board to ensure an amicable exit from the club he has been at since the age of 13.

Both ESPN and Goal have stated that Messi is keen to avoid an ugly, drawn-out departure that would add to the agony for the Barcelona faithful.

Fans have gathered on successive nights this week outside the club’s Nou Camp home in a desperate bid to persuade Messi to stay and to vent their fury at Bartomeu.

If Messi is able to force through his exit, Manchester City are believed to be his most likely destination. The Argentine spoke to former manager Pep Guardiola in the wake of Barcelona’s 8-2 mauling at the hands of Bayern Munich in the Champions League quarterfinals.

The English club are already said to have looked at ways of making a Messi deal financially feasible, while Qatari-backed French giants Paris Saint-Germain are also reported to be circling.

Much will depend however on the disputed contract clause which may or may not allow Messi to leave for free. The player’s team insist that the clause is still in force due to the extension to last season caused by the Covid-19 pandemic, although Barcelona claim it expired in June.

Should the club’s stance be ruled legally sound, and if Barca bosses insist on nothing less than the release clause for Messi, it would effectively rule out an exit as no would-be suitor  – even those awash with petrocash such as Manchester City and PSG – could afford the striker without running serious risk of breaching Financial Fair Play (FFP) rules. 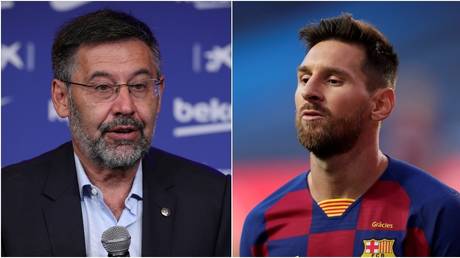