Close
Trending News
HomeSport‘Messi is not god’: Experts claim Leo has lost his magic but Barcelona pray for another winner against Atletico Madrid in La Liga

‘Messi is not god’: Experts claim Leo has lost his magic but Barcelona pray for another winner against Atletico Madrid in La Liga

‘Messi is not god’: Experts claim Leo has lost his magic but Barcelona pray for another winner against Atletico Madrid in La Liga

As the pressure mounts on Barcelona boss Quique Setien ahead of the crucial La Liga clash with third-placed Atletico Madrid tonight, stats have shown Lionel Messi’s struggles – and some have argued that the star should be dropped.

Barcelona could choose few less promising opponents than Atletico Madrid, the visitors to Camp Nou in La Liga tonight, as they bid to improve on faltering form that has seen them win only one of their last three matches following lowly Celta Vigo’s 88th-minute equaliser against them on Saturday.

Rarely have Barca needed Messi to score more. The La Liga top scorer has gone three matches without a goal ahead of the visit of a characteristically uncharitable Diego Simeone side who would have gone almost seven hours without conceding but for Alaves’s 93rd-minute consolation penalty at the weekend.

Perhaps the challenge of seeing off the team behind them and temporarily overhauling the two-point lead enjoyed by Real Madrid, who play fifth-placed Getafe on Thursday, will inspire Messi as he tries to make up the 15-goal deficit on his worst season of the last decade, when he scored 41 in the 2013/14 season.

That might require a change of approach from the beleaguered Setien. Messi had already said that Barca would not be able to win this season’s Champions League playing in the manner they have adopted under their new coach, and the figures suggest Setien’s style has hindered Messi, producing his worst goals-per-game ratio since the reign of Frank Rijkaard between 2003 and 2008.

Setien has insisted that there was nothing untoward in Messi appearing to dismiss attempts at communication during the Celta Vigo match and claimed that Messi speaking his mind is commendable. There can, however, be little counter to concerns over Messi’s failure to score in 10 of the 16 matches in which he has played under Setien.

“Messi is not the problem,” Barcelona legend Lobo Carrasco told Don Diario in the week that rumors swirled suggesting Barca were considering sacking Setien before the end of the season. “If I could see that Messi was not willing to give more, I would say so.

“Let’s not attack him – not because I am defending him, but because right now he has become more human. The things that he did with the ball in the past were crazy and now things are missing that are not his fault.”

Spanish journalist Tomas Roncero was considerably less diplomatic alongside Carrasco, telling him: “Messi is not God. Come down to earth, Messi is here.

“He is human like you and me. He is a person and he suffers, he feels weak. Let him be human and grow older. Age is unforgiving and whether you like it or not, Messi has an expiration date.”

Former Argentina goalkeeper Hugo Gatti added that he had “no doubt” that Messi is out of sorts and should be rested. “If I were Setien, I would leave him out,” he told the fiery debate.

One small comfort for Barca is Luis Suarez’s culmination of an injury-enforced run that resembled a famine compared to Messi’s minor drought. Suarez had gone 175 days without a goal before scoring in either half to twice give his side the lead before they dropped more potentially precious points at Estadio de Balaidos.

Unfortunately for Setien, Suarez did little to dispel speculation that the players had been unhappy with the way the team was set up as they failed to win away for the 10th time in 16 Liga trips this season.

“It leaves a bitter taste – one of sadness and frustration because we have lost two points,” said the striker, who needs 10 more goals this season to avoid equaling his lowest ever tally in a campaign for the club.

“It’s up to the coaches to analyze it. We’re there to do our best on the pitch. Away from home, we’re dropping important points that we didn’t usually drop in other seasons.”

As ever with Messi and Barcelona, there are caveats. Messi set up both of Suarez’s goals – the first with a beautifully chipped free-kick that even the club’s embattled coaching staff almost definitely deserve some credit for – and his most effective strike partner remains the third-highest Liga goalscorer, with the capacity to hit top form after four months out through knee surgery.

Celta, too, are in a false league position and were unlikely to be pushovers given that they arrived on a run of one defeat in nine, including a 2-2 draw at Real Madrid in which they were ahead for 45 minutes.

In December, Messi was magnificent at Atletico, playing a lightning one-two with Suarez before placing a spectacular first-time strike into the net from outside the area four minutes from time.

Setien would snatch a repeat of that night with both hands, knowing that his future may be in those of the Barcelona board should Atletico reap revenge. 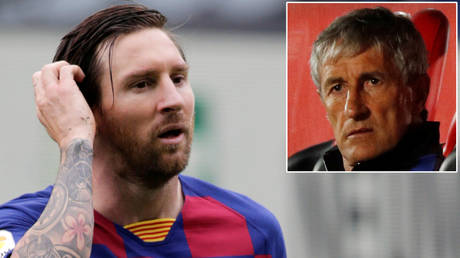