Tiger Woods had a Sunday to forget at Augusta as he shot a 10 on the par-three 12th hole, finding the water on three separate occasions – the worst score he has posted on a hole in his near 30-year career.

The 44-year-old five-time Masters champion didn’t look to be in a chance of claiming his sixth when play began early on Sunday but a little over half-way through his round, his chances hit a brick wall, or more specifically a water trap.

Woods’ first two shots sailed into Rae’s Creek, and another overshot its target to settle in a bunker – with his exit shot also getting inadvertently submerged.

The resulting septuple-bogey moved Woods to 4 over par – and the irony of it coming at the 12th hole, where Woods moved ahead of the pack to win the tournament in a remarkable comeback last year, won’t have been lost by the millions of socially distanced viewers watching the broadcast.

Here’s a supercut of Tiger Woods’ 10 on the par-3 12th today. https://t.co/OaZFTSdOiE pic.twitter.com/Ezk92HHBid

Tiger would be in the top 20 right now if he didn’t have that epic meltdown.

Tiger has played PGA tour golf for 20+ years and carded his first 10 today. Pffft, I do that every weekend. Welcome to the club @TigerWoods

“That just started the problems from there,” Woods added. “From there I hit a lot more shots and had a lot more experiences there in Rae’s creek.”

It was a near-impossible task for Woods to repeat last year’s heroics as he began the day 11 shots off the leader Dustin Johnson.

Woods did pick up the pace down the stretch and sank five birdies in the following six holes, finishing with a 76 to end one under par overall, but the damage had already been well and truly done by that stage. 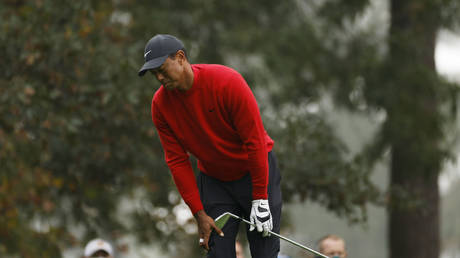 'He thought the election was...