Fans who have been banned from attending stadiums during the coronavirus pandemic watched with a mix of admiration and unease as more than 20 dancing robots were filmed stamping and gyrating in sequence in a huge empty stadium.

A humanoid robot named Pepper and a set of four-legged bots called Spot replaced supporters at the 40,000-capacity Fukuoka Dome in Japan, performing a range of moves in sync with the fight song usually accompanied by fans before Fukuoka SoftBank Hawks’ baseball matches.

The robots stood on a podium, wore Hawks caps and flags, waved their arms and tapped their feet in time ahead of the Hawks’ 4-3 Nippon Professional Baseball win.

“Meet our future robot overlords,” warned one viewer, while another said: “One of the creepiest things I have witnessed.”

One of the creepiest things I have witnessed.

Spot is the creation of Boston Dynamics, the company whose robotic dogs went viral when they were first seen being used to compel people to maintain social distancing in Singapore as the coronavirus outbreak spread in April.

The dogs, which weigh around 62lbs and have been brought in to “liven up the game in a new style due to the spread of coronavirus infections”, according to the team, have never been used in any other sporting setting.

They are less active during the game than the humanoid, which is programmed to strike an “enthusiastic heat man pose” at successful moments for the team.

“Once you look past that this is creepy, it’s tough to not respect how they bring a lot of flair and joy to their version of baseball,” said an American viewer, observing the differences between the Japanese game and Major League Baseball.

“They have dancing robots during pandemics…and theme songs for their players. We have dudes getting upset over bat flips.”

Pepper, who was designed by the robotics branch of the multinational company the team is named after, was originally tested during a behind-closed-doors game in mid-June.

“When I danced at the dome last time, I received many messages of encouragement from Harry Hawk and many others,” the team quoted the humanoid as saying.

“I am practicing and practicing every day. Please look forward to my collaborative dance.” 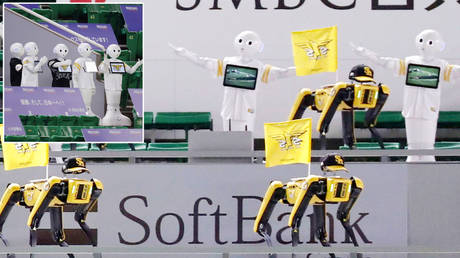