Rarely one to miss an opportunity to take a pop at his nemesis, Conor McGregor has trolled former UFC opponent Khabib Nurmagomedov after the Russian called Octagon girls “unnecessary” in MMA.

Speaking at a recent press event in his homeland, retired UFC star Khabib – who is a devout Muslim – questioned the role of glamorous ‘ring girls’ who hold up cards bearing the number of the upcoming round during breaks in the action.

“Please don’t think I have anything against women. Women are created equal with women… but for me, [ring girls] are absolutely unnecessary for MMA,” said the former lightweight champion.

Those comments have come to the attention of McGregor, 33, whose own brash, flash persona is as far removed as possible from the man he once shared the Octagon with.

Putting a twist on the image, the word ‘Khabib’ was written across Smithers with the dancers being given the names of two popular UFC Octagon girls – Brittney Palmer and Arianny Celeste.

The tweet wasn’t the only one in McGregor’s latest barrage to target Khabib and his team.

Recalling the post-fight brawl which erupted after the Russian choked out his Irish rival in their 2018 grudge match in Las Vegas, McGregor shared footage of his clash with members of Khabib’s entourage.

The Notorious claimed he had got the better of Abubakar Nurmagomedov – Khabib’s cousin – and teammate Zubaira Tukhugov in the melee, bragging: “I am undefeated in post-fight brawls and melees.”

Yes I do. I am undefeated in post fight brawls and melees. https://t.co/OE3PyDECOs

Fell into me for a hug he did.
The usual out of them. https://t.co/Wsr2ywjFAi

McGregor’s online boasts are as frequent as ever, but the Irishman is in no position to back them up inside the Octagon as he recovers from the leg break he suffered in his defeat to Dustin Poirier at UFC 264 in July.

That was the Irishman’s third defeat in his last four Octagon outings – including back-to-back losses to Poirier this year and his submission at the hands of Khabib in October of 2018.

McGregor has claimed he will be back in action in 2022. Khabib, meanwhile, remains retired after defending his lightweight title against Justin Gaethje last year and is focusing on his business endeavors, including building his Eagle Fighting Championship MMA promotion. 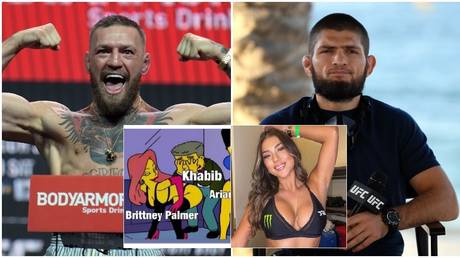