‘McGregor can beat him’: George Foreman says Conor McGregor’s best days are behind him – but backs ex-UFC champ to beat Pacquiao

‘McGregor can beat him’: George Foreman says Conor McGregor’s best days are behind him – but backs ex-UFC champ to beat Pacquiao

George Foreman wants Conor McGregor to make the full-time switch to boxing after suggesting that he has gone as far as he can in MMA, and says that he would back the notorious Irishman to defeat Manny Pacquiao in the ring.

McGregor’s knockout defeat to Dustin Poirier in January has certainly caused some harm to the former UFC dual-weight champion’s brand – but there remains a great deal of interest in the Dubliner pursuing further paydays in boxing, according to legendary former heavyweight champion Foreman.

McGregor has competed in just one professional boxing match in his career, when he became the ’50’ on Floyd Mayweather’s spotless career ledger in Las Vegas in the late summer of 2017.

More recently, he has been heavily linked in the media to a 2021 showdown with multiple-weight world champion Pacquiao, 42.

Both McGregor and Pacquiao are represented by the same management group in the US, Paradigm Sports Management, and it was thought that Pacquiao’s recent signing with the firm was designed, in part at least, to iron out any creases in making a blockbuster deal between the two after both had publicly expressed an interest in the fight.

In the wake of McGregor’s loss to Poirier, though, Pacquiao’s camp pulled back from the deal somewhat – with McGregor reportedly focusing on a summer trilogy bout with the American.

Foreman says that he would prefer for McGregor to switch full time to boxing, and has suggested that his talents are now more suited to boxing than mixed martial arts.

“It’s hard for McGregor to accept it but he’s a better puncher than he is in MMA,” said Foreman to The Star.

“I think if he has a fight with Pacquiao he can actually beat him – good rules, over ten rounds, McGregor can beat him. He’s already adjusted to boxing, he’s not going to do good in MMA anymore.

“Pacquiao is very good, as a matter of fact, but McGregor can beat him in a boxing match.”

Any such switch isn’t likely to be signed off by Dana White and the UFC, who own McGregor’s promotional rights. White has stated that he is keen to arrange McGregor-Poirier III instead of signing off on another McGregor foray into boxing.

“When you’ve got two guys who want the trilogy as bad as those two do, we try to make it happen. It’ll happen this summer,” White promised after UFC 258.

However, with the UFC largely unable to command the same sort of fees for McGregor as he would likely garner in a boxing ring, White and the UFC could well be priming themselves for a cross-code tug of war over one of their most valuable assets. 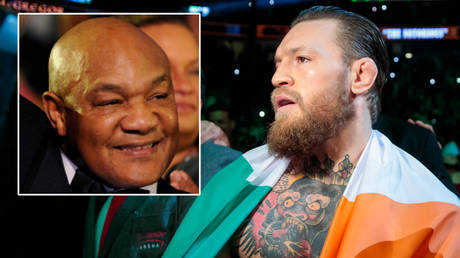