Wonderkid Kylian Mbappe has put Real Madrid on alert by refusing to extend his contract at French champions Paris Saint-Germain, according to reports from Spain.

According to Deportes Cuatro, the 22-year-old has shattered the French outfit’s ambitions of getting him to pen a new deal by informing them of his intentions.

Speaking last night in Germany, sporting director Leonardo was tight-lipped on the futures of both Mbappe and Neymar, who are free to walk in 2022.

“Soon we’ll talk about concrete things,” the Brazilian club legend said. “We’re also happy to talk about contracts, but today we just want to focus on the game against Bayern [Munich].

“Now we have to look at different things and we will come to a conclusion in no time. But the important thing is to focus on the Champions League,” he concluded.

With an outstanding brace during one of the most thrilling UCL games in an age, Mbappe put PSG in reaching distance of the last four via a 3-2 win over the Bavarians on Wednesday.

Becoming the first player to score five goals in the competition’s last 16 and quarterfinals, the dust has barely settled on his latest feat before this latest bombshell.

More specifically, Mbappe’s reasons for wanting to flee the Parc des Princes at the end of the season are a desire to ply his trade in a more competitive league and don the iconic Los Blancos shirt at the Bernabeu.

👀 You’re looking at the first player in @ChampionsLeague history to score 5 away goals across the Round of 16 and quarter-finals in the same season. You’re looking at a supernatural talent 🪐@KMbappe | @PSG_English | #UCL pic.twitter.com/L43HwwyqnQ

This will naturally be music to the ears of Zinedine Zidane and Real Madrid president Florentino Perez.

Playing a game of chicken with his PSG counterpart Nasser Al-Khelafi, the Spanish press claim that Perez will not make an approach towards Mbappe until the QSI mogul puts a price on the next generation superstar.

To recuperate some of the $197 million they paid Monaco for his services in 2018, after he joined on loan the year before, Mbappe could leave for a cut-rate of at least half that fee or nothing at all on June 30, 2022. 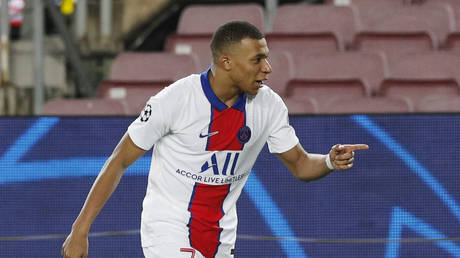 ‘Airmen’ are grounded by the Aussi...