Ukrainian volleyball player Ludmila Osachuk has shared a revealing photo session, joking that she hopes to raise the game’s popularity with the help of some raunchy snaps.

“Maybe someone will fall in love with volleyball,” the player captioned one of her photos on Instagram.

The stunning blonde proudly demonstrated her scantily clad photo shoot, where she is seen holding a ball and wearing nothing but lingerie and a black leather jacket.

The athlete plays in the Ukrainian Super League as a wing spiker for the Volyn University team.

Along with her sporting career, Osachuk also has a line in modeling, which she actively promotes on her social media accounts.

This season the winner of the Ukranian Super League was not decided as the championship was interrupted by the COVID-19 pandemic, which has affected all major sporting events around the globe. 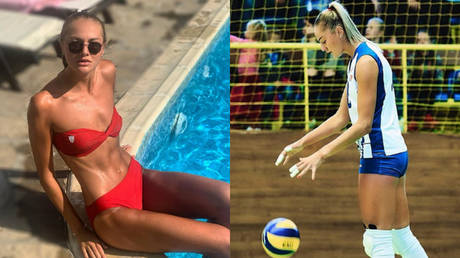