Rafael Nadal produced an astonishing performance at the French Open on Sunday to win his 13th title at Roland Garros, beating Novak Djokovic in straight sets.

The Spaniard dominated almost from start to finish as he romped home 6-0, 6-2, 7-5 in two hours and 41 minutes on Court Philippe-Chatrier to claim his 20th Grand Slam title, equalling Roger Federer’s all-time record in the process.

His victory was also the 100th time he’s won in Paris, in what was his 102nd match, and his win marked the fourth time he has gone through an entire French Open campaign without dropping a single set.

Fans were in awe of Nadal’s performance, with one Twitter user describing it as a “masterclass of the highest order,” while another added: “Nadal taking us all to tennis school again. Novak in the front of the class.” Another simply said, “Nadal on clay. That’s all there is to say.”

Nadal has picked out the hole in Djokovic’s game and relentlessly picked on that so much, that in trying to repair that hole, Djokovic has given up even more holes in the other facets of his game.

This is a masterclass of the highest order.

With the writing on the wall after two sets, there was only one hope for Djokovic, as one spectator observed:

Djokovic’s best hope is that Nadal hits a ball boy

Nadal opened the first set with a “bagel” (6-0), and though five of the games went to deuce, the gulf in performance was evident by the scoreline.

The 34-year-old roared out of the traps as he broke Djokovic in the opening game, rattling off three consecutive points to do so from 40-15 down.

He quickly consolidated the break before extending his lead further with a second break of serve, as the Serbian struggled to get his first serves in or deal with Nadal’s intensity during rallies.

Djokovic showed a little more resistance in the fourth game, but it nevertheless went Nadal’s way after he saved three break points. The Spaniard then compounded the world No. 1’s misery when he battled back from 0-40 to secure a third break of serve, before seeing out the set.

Djokovic eventually stopped the rot when he held serve in the first game of the second set, but not before he had to save three break points.

Normal service resumed soon after as Nadal broke him to open up a lead once again, and the ‘King of Clay’ made it 10 games from 11 when he grabbed a double-break to take a 4-1 lead, and the second set soon followed.

This is what you came for 😱@RafaelNadal #RolandGarros pic.twitter.com/oJ4XKU9R3O

Nadal had to wait a little longer than usual for the breakthrough in the third set, but it arrived all the same when he broke Djokovic to love in the fifth game.

The Serbian finally earned a break of serve himself when he hit back to level proceedings at 3-3 with a backhanded winner down the line.

His revival continued a little longer as he kept things on serve until 5-5, but Nadal’s brilliance eventually told once again as he grabbed a seventh break in the match before serving out for the championship to love. 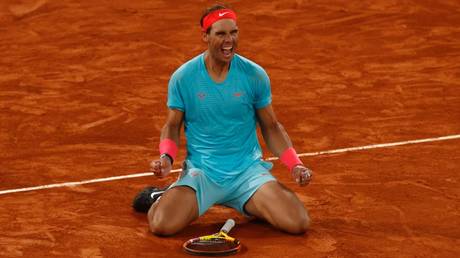