Diego Armando Maradona may have entertained and infuriated in equal measure, depending on whether you were supporting him or his opponents, but when he was at his best, there were few, if any, who could match his brilliance.

Here, as we pay tribute following his untimely death, we take a look back at five of the greatest, and most memorable, moments from Maradona’s incredible career.

THE ‘HAND OF GOD’ GOAL

Maradona’s performance against England in the 1986 World Cup has already gone down in history as his most iconic display for his country. Pitted against a nation that was at war with his homeland over custody of the Falkland Islands just four years earlier, passions ran deep when the two nations met in the quarter-finals of the tournament.

For a match befitting the rivalry, the action on the pitch was tense and tetchy, and it needed something out of the ordinary to bring the contest to life. Unsurprisingly, it was Maradona who provided it.

When a loose ball was hacked into the air by a panicking Steve Hodge, Maradona latched onto its flight path long before anyone else, including England goalkeeper Peter Shilton.

With the ball dropping from a great height in the heart of England’s penalty area, Maradona leapt into the air and, just as Shilton appeared in range to punch clear, knocked the ball past the outrushing keeper and into the empty England net.

There was a brief moment of hesitation from Maradona, who knew he’d used his hand to get the better of Shilton. But, in a moment of thinking every bit as quick as the handball itself, he glanced at the linesman, saw no adverse reaction from the official, and charged away in celebration.

After the match he referred to the goal being scored by “The Hand of God.” It broke the hearts of their big rivals and helped Argentina win the match 2-1, and it was a goal that has lived in infamy ever since.

THE ‘GOAL OF THE CENTURY’

If Maradona’s first goal against England was one of the most controversial ever scored in a World Cup, then his second was almost certainly the greatest.

With Argentina 1-0 up, and with England looking to open up in search of an equalizer, Maradona picked up a loose ball in the center circle, twisted and turned, and set off on the most legendary run ever seen during a World Cup match.

Maradona outpaced the entire England midfield, then tore through England’s notoriously tough-tackling back line before swerving past Shilton and passing the ball into the empty net.

It was, quite simply, a moment of pure football genius, and showed just why Maradona was considered the greatest player in the world. It’s also something that no other Argentinian player, including Lionel Messi, has ever come close to replicating on the sport’s biggest stage.

HIS ONE-MAN SHOW AGAINST BELGIUM

If his two-goal performance against England in the quarter-finals was iconic, his display in the semi-finals against Belgium was arguably even more complete.

With his teammates misfiring in front of goal, despite being teed up by a string of Maradona passes, the little No. 10 took matters into his own hands and won the game by himself.

A beautiful flick of his left boot put Argentina into the lead after he outsprinted two Belgian defenders, and goalkeeper Jean-Marie Pfaff, to Jorge Burruchaga’s through ball.

Then, he netted another stunning solo effort when he picked up the ball 40 yards from goal, turned on the afterburners and sped past all four members of Belgium’s defense before firing unerringly into the far corner.

It was another example of Maradona taking a game by the scruff of its neck and winning it almost single-handedly, and it saw Argentina make it all the way to the World Cup final, where he would go on to set up the winning goal with a beautiful pass for Burruchaga.

HIS ICONIC WARM-UP AT NAPOLI

One of the most memorable videos of Maradona features the Argentinian superstar during his pre-match warm-up ahead of a match for Serie A side Napoli in the late-1980s.

While his teammates, including Brazilian superstars Careca and Alemao, warmed up diligently, Maradona instead danced and played with a football. And it was brilliant.

The sight of Maradona, bootlaces untied, dancing to 1980s hit “Live is Life” by Opus while juggling a football with ridiculous ease, showed the world the sheer mastery of a football Maradona possessed at his peak.

The video, which has been posted and reposted online countless times, has been watched on YouTube more than five million times, and continues to captivate fans to this day.

THE MOST INTENSE GOAL CELEBRATION EVER

Considered by many to be past his best, Maradona was nonetheless still selected for the Argentina squad for the 1994 World Cup in the United States where, during their match against Greece, the little magician conjured up another moment of magic.

After some intricate one-touch play just outside the penalty area, Maradona took possession, shifted the ball to his left to create a shooting lane, then smashed an unstoppable shot into the top corner.

The goal itself was stunning, but it was Maradona’s celebration that stole the headlines as he charged, screaming his eyes seemingly bulging, at the lens of one of the pitchside cameras.

It almost looked as if Maradona was under the influence of something and, sure enough, after he was selected for a post-match drug test, he was subsequently found to have tested positive for what the media at the time described as “a cocktail of drugs”.

It sparked the beginning of his demise as a player as his career entered a downward spiral after the tournament, but it showed that, even at his advancing age, he was more than capable of producing a stunning moment on the sport’s biggest stage. 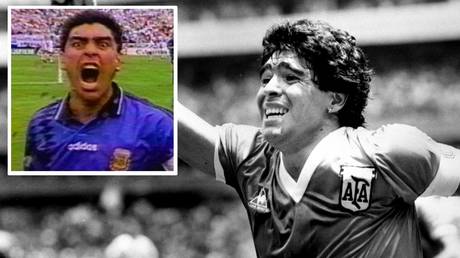