Diego Maradona wants to bring Ballon d’Or winner and Brazil legend Ronaldinho out of retirement to sign for Gimnasia y Esgrima La Plata, when the jailbird footballer gets out of Paraguayan house arrest for using a fake passport.

Ronaldinho is currently being held in the presidential suite of the Palmaroga Hotel in Asuncion on a release bond of around $800,000, having been released from prison after 32 days pending a trial for using a doctored Paraguayan passport to travel into the country. His trial is currently on hold due to the outbreak of the coronavirus.

When Ronaldinho’s court drama is all done and dusted, Argentine football icon would like the 40-year-old to make a comeback, five years after he kicked a ball in anger, not including his prison courtyard kick-arounds.

It is understood there hasn’t been any formal contact between the two parties, although Maradona is interested in bringing the 2002 World Cup-winner to his Buenos Aires hometown, where he now manages Superliga Argentina side Gimnasia, according to El Dia.

Maradona, 59, was tempted to make the return to coach in Argentina with a whopping $1.5 million-a-year contract, and has set his sights on bringing Ronaldinho, who last played for Brazilian club Fluminese in 2015, back into football.

Ronaldinho and Maradona share the distinction of being former Barcelona players and also World Cup winners; the buck-toothed Brazialian will be remembered as a mercurial attacking midfielder during his five-year tenure with the club, where he won two La Liga titles and the 2006 UEFA Champions League.

Maradona’s time at Camp Nou was less successful. He arrived for a world record $7.6 million in 1982 and despite winning three domestic cups, his two injury-hit seasons were marred by disputes with board members and on-pitch violence. His greatest club days came in Serie A with Napoli.

Ronaldinho won football’s biggest prize at Japan & South Korea in 2002 with Brazil, whereas Maradona fired his country to victory as captain in 1986.

Despite the rumours over a potential Ronaldinho return, the ex-player’s brother, who acted throughout his career as his agent and was heading negotiations, is understood to be against any move to Argentina. 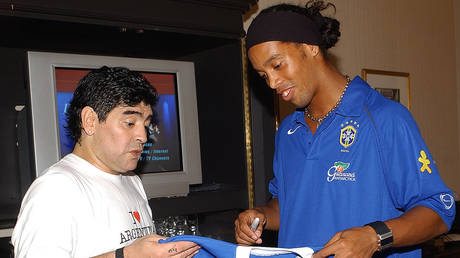 'It makes complete sense to m...