Manchester United captain Harry Maguire has appeared in court after being arrested for his alleged involvement in an altercation with authorities on the Greek island of Mykonos, amid claims that he tried to bribe the police.

Maguire was seen walking free from court early on Saturday after reports that he was arrested after “verbally and physically” assaulting a police officer on Thursday night, leading to the England international being detained overnight.

According to local media, Maguire and others in his party became embroiled in a dispute with another group of tourists at a bar that required police intervention.

Maguire was then alleged to have attacked at least one policeman, after it required five officers to drag him to the ground.

According to the Mykonos Voice, the dispute arose when a group of tourists targeted Maguire and his party with aggressive language, shouting “F*ck United!” at the Old Trafford captain.

It was also alleged that Maguire’s sister Daisy was assaulted on her arm with a “sharp object,” prompting Maguire to intervene.

“They were trying to wind him up,” British tabloid The Sun quoted a source as saying.

“They were also trying to mess around with a group of girls there. Harry got upset. They told Harry, ‘F*** United’ again and a brawl started with Harry’s mates.

“Two or three more police came but Harry was so strong and upset that they couldn’t pin him down. It took more than five officers to get him down.”

Harry Maguire refuses to answer questions after leaving Greek court, but when asked if he is a free man, his lawyer said: “Right now, yes”

Police later said that two of their officers received facial injuries after being thrown to the ground, where they were punched and kicked. One of the men involved was later said to have made an attempt to bribe the police.

Mykonos police further detailed in a statement that the violence continued at the police station, where the men were “pushing and beating police officers.”

Attempting to bribe a police officer carries a maximum sentence of three years in jail under Greek law, but a legal representative for Maguire said he denies all charges against him.

Maguire didn’t comment as he left court, but when asked if his client was a free man, his legal representative replied: “Right now, yes.” 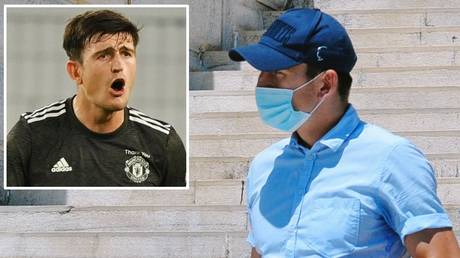