Manchester United are taking measures to prevent a repeat of the scenes which forced the postponement of the recent Premier League match with Liverpool, erecting a 10ft tall ‘ring of steel’ to prevent more demonstrations.

The two arch-rivals of English of football will meet on Thursday evening, just under two weeks after irate supporters raided Old Trafford to demonstrate against the ownership of the club by the US-based Glazer family.

There were also scenes of unrest in Manchester city center which saw fierce clashes with police, during which several officers required medical treatment.

There are fears among the United hierarchy that Thursday’s rescheduled fixture could see a repeat of the chaotic scenes which came as a result of the club’s involvement in the ill-fated European Super League project, in addition to long-standing concerns about the Glazers’ handling of United’s financial affairs.

Such is the concern among United’s bosses that they have erected the so-called ‘ring of steel’ to protect some of the more vulnerable areas in and around the stadium, including the Munich tunnel entrance through which fans gained entry to the famous stadium in May 2.

It is also understood that the club have instituted further security measures which they are keeping from the public in the event of another security breach.

The postponement of the original fixture has played havoc with United’s end-of-season schedule, forcing Ole Gunnar Solskjaer’s side to play three games in the span of five days including this week’s home defeat by FA Cup finalists Leicester City, after which the Norwegian coach was pilloried by critics for fielding an under-strength side in a game which could have significant repercussions for this season’s Champions League qualification places.

Liverpool are among the teams chasing the coveted fourth position in the league which would ensure qualification for next season’s Champions League, but boss Jurgen Klopp surprisingly sprang to Solksjaer’s defence when asked about his rival’s decision to field an under strength team against Leicester.

Manchester United have built a ring of steel around Old Trafford to keep out anti-Glazer protesters for Tuesday’s game against Leicester and Thursday’s visit of Liverpool. pic.twitter.com/Bqr8ZA8xf9

“Playing Sunday, Tuesday, Thursday is a crime,” said Klopp. “If we do not make it into the Champions League, it will not be the fault of Ole Gunnar Solskjaer or his players.

“It will be our fault because even in this season, in which we have had so many injuries, we really should have been five or six points better than we are.

“I know Ole made ten changes but I would have done the same thing – I expected him to do that. This is the end of a long season already and then you get Sunday, Tuesday, Thursday and it’s just not right.

“So it is not the fault of Ole Gunnar Solskjaer, even if it means we now need to get a few favors if we are going to make the top four.”

One wonders if the German will be quite so pragmatic late on Thursday, should Solksjaer’s charges deal Liverpool another crushing blow in their hunt for European football next season. 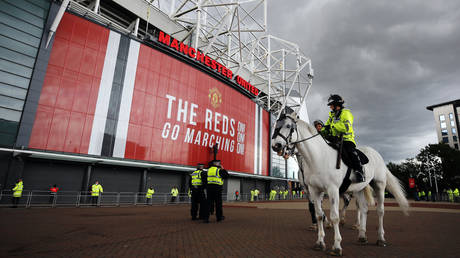 David Cameron admits he was wrong...