Ole Gunnar Solskjaer’s pursuit of a right winger before the transfer window slams shut seems to have yielded results amid reports that Barcelona misfit Ousmane Dembele looks set to trade the Camp Nou for Old Trafford.

Frenchman Dembele, 23, has flattered to deceive in Catalonia since his bumper €145 million (£132 million) transfer to the La Liga giants in 2017. He has scored just 19 goals in 72 appearances for the club across all competitions in a spell which has been interrupted by injury, but his time in Spain now appears close to its conclusion after Manchester United registered their interest in the player as a failsafe option to their apparently doomed pursuit of Jadon Sancho.

New Barca boss Ronald Koeman is understood to be an admirer of Dembele but has sanctioned the move given that he already has three options for the right side of his attack – Lionel Messi, Antoine Griezmann and teenage prodigy Ansu Fati. The club are also keen to raise further funds to complete a deal for Lyon player Memphis Depay, after already allowing Luis Suarez, Ivan Rakitic and Arturo Vidal to leave.

According to Spanish publication AS, Barcelona have given Manchester United permission to discuss terms with Dembele and are expected to take a significant loss on the player, with fees in the region of £45 million (€49 million / $58 million) to £65 million (€71 million / $84 million) being mentioned.

United boss Solksjaer has been keen to add reinforcements to the right side of his attack, with only Daniel James considered a natural right-winger in the Norwegian’s squad. The club had doggedly pursued Borussia Dortmund’s young Englishman Jadon Sancho but were initially put off by the price tag associated with him.

It was also reported on Tuesday that United had returned with another offered closer to Dortmund’s original asking price for Sancho but it has been refused amid a strict stance that the player is no longer available in this transfer window at any price whatsoever.

The addition of Dembele to Solksjaer’s ranks would fill a position of need within the Red Devils’ squad – but the fact that it more than likely won’t be Sancho who does so could be seen as representing the latest in a long line of blunders in the Manchester club’s transfer policy.

Porto’s Brazilian fullback Alex Telles, meanwhile, is another target for Solskjaer and the club are understood to have opened talks with an initial £12 million (€13.1 million / $15.5 million) transfer for the player whose contract expires in under a year’s time. 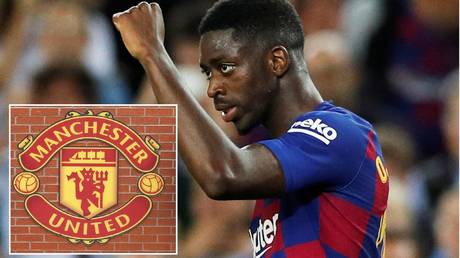