Manchester City are set to renew their efforts to lure Lionel Messi away from Barcelona next summer by reportedly offering the star a 10-year deal which would include him taking an ambassadorial role for the City Football Group.

City, who retain a strong Spanish nucleus within the club, attempted to position themselves as the beneficiaries of Messi’s attempts to engineer a move away from the Camp Nou this summer.

Before Messi could be reunited with former boss Pep Guardiola and ex-Barca executive turned Manchester City Director of Football Txiki Begiristain, the Argentine star withdrew his request to leave when it began to appear that his rancor with the club would lead him to a courtroom before it would the Etihad.

But with Messi’s contract dictating that he can leave for free at the end of this season, the Manchester City boardroom has reportedly begun plotting a more comprehensive move for the six-time Ballon d’Or winner, which would see Messi embark upon a ten-year association with the club.

Per a report by The Times, City executives are putting together a package for Messi which would see him play for the club for the next few seasons after which he would be moved on to another of the teams under the City Football Club umbrella, whose portfolio also includes New York City FC, Melbourne City and Yokohama Marinos.

After that, and presumably when his playing career ends, Messi would take on a position as being a global ambassador for the City Football Group brand.

However, City will be faced with resistance from a Barcelona board who retain hope that Messi can be persuaded to continue his association with the club past this season. Sky Sports reported this week that figures within Manchester City are wary of Messi’s age, 33, and the associated salary demands for a veteran player.

The club’s decision to furnish Guardiola with a new two-year deal recently was also seen in some quarters as a move to fortify any potential deal with Messi. City can formally approach the Argentina star on January 1 ahead of the expiration of his current contract on June 30. 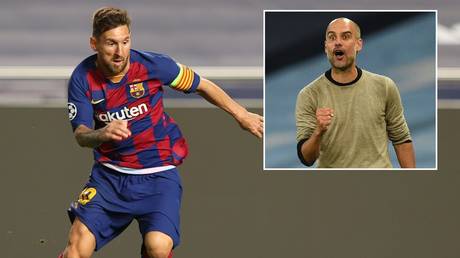