Manchester City are looking at the financial aspects of a potential move for disgruntled Barcelona star Lionel Messi in a move which could reunite the striker with former manager Pep Guardiola, according to reports.

Messi has never been closer to a Nou Camp exit, following a dire season in which Barcelona lost out to Real Madrid in the La Liga title race before being dumped out of the Champions League 8-2 by Bayern Munich in one of the heaviest defeats in the long and illustrious history of the Catalan club.

Messi is under contract at Barca until 2021 but reportedly told new Barcelona boss Ronald Koeman at an emergency meeting last week that he feels “more out of the club than it,” further setting a number of top European clubs on red alert over a potential move for the star this summer.

ESPN are now reporting that Manchester City are looking at the financial options of a potential Messi deal and how they could snag the Argentine while remaining within Financial Fair Play (FFP) rules.

Barcelona and Koeman have been adamant in public that they will not let Messi leave this summer – noting that in any case he has a €700 million release clause ($830 million) – although that does not appear to have stopped City from weighing up the possible financial implications of a move for the star.

There have also been suggestions that despite Barca’s public stance that Messi is going nowhere, some figures on the board would be amenable to letting him leave if he agitates for a move, and reinvesting the money in a badly-needed squad rebuild.

City would seem among the most likely potential destinations for 33-year-old Messi should he leave Barcelona as the move would reunite him with former manager Pep Guardiola, with whom he enjoyed spectacular success at the Nou Camp between 2008 and 2012.

Many, however, would point to financial constraints making any such deal unfeasible, given the high transfer fee Barca would likely charge as well as Messi’s wage demands.

City recently avoided a two-year Champions League ban over alleged FFP breaches, winning their appeal against the UEFA decision at the Court of Arbitration for Sport (CAS) in Switzerland. 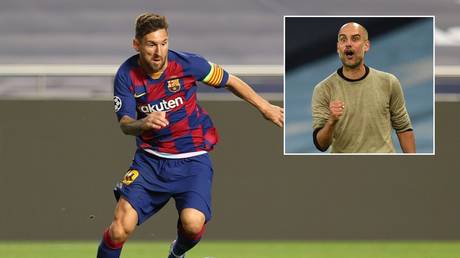 Rule Britannia! subtitles should b...