Manchester United have issued further official comment on Sunday’s chaotic scenes inside and outside of Old Trafford, as they promise to identify individuals who were responsible for ‘criminal activity’.

Hundreds of Manchester United supporters were involved in furious demonstrations at the home of the multiple-time English champion ahead of Sunday’s (eventually postponed) fixture with arch-rivals Liverpool.

The target of the fans’ ire, the Glazer family, have remained tight-lipped in the wake of the furious protests but the club itself have reacted by saying that while they respect the right of their supporters to peacefully protest, any fans found to have engaged in violent activity will be subject to penalties from both the police and the club itself.

“Following events yesterday, while many fans wanted to exercise their right to protest and express their opinion peacefully, some were intent on disrupting the team’s preparation and the game itself, as evidenced by activity at the Lowry Hotel and at the stadium,” the club announced in a statement posted to its official website.

“Reports in mainstream and social media that protesters were able to access the stadium and pitch via a gate opened by club staff are completely incorrect.

“After breaking through barriers and security on the forecourt, some protestors climbed the gates at the end of the Munich tunnel, then forced access to a side door in the stand, before opening an external door that let others through to the concourse area and the pitch.

“A second breach occurred when a protestor smashed the door of a disability access lift, enabling a group to enter the stand.”

Manchester United fans storm Old Trafford ahead of the match against Liverpool in protest of the club’s ownership 📸 pic.twitter.com/kfTJJ3MgD6

Manchester United fans clashed with police outside Old Trafford during protests against the club owners pic.twitter.com/GFOVidVRDz

Hundreds of Manchester United fans were captured on the television broadcast invading the pitch, with numerous other instances of supporters uploading videos of the pitch invasion to social media.

However, there were more serious scenes outside the famous ground. The Manchester United team bus was obstructed from departing at the nearby Lowry Hotel, while there were also significant confrontations and violent scenes with Greater Manchester Police – with three reported to have suffered injuries in the fracas, one suffering a serious facial wound after being struck with a glass bottle. This police offer was rushed to hospital for “emergency treatment“, per reports in the media.

Further video footage released on Monday also shows members of the police force clashing protestors, with one clip appearing to suggest that a fan was punched several times by an officer while being detained by three others.

According to police, the 28-year-old man in the clip was arrested for suspicion of theft from a vehicle and public order offences. Greater Manchester Police’s Professional Standards Branch have announced an investigation into the circumstances of the arrest and the video footage of it.

The club statement continues to say that while the majority of the demonstrations were entirely peaceful, fans identified as having engaged in criminal damage will be subject to prosecution while also receiving punishment from the club.

“The majority of our fans have and will condemn criminal damage, along with any violence towards club staff, police or other fans, and these now become a police matter,” the statement added.

“The club has no desire to see peaceful protestors punished, but will work with the police to identify those involved in criminal activity, and will also issue its own sanctions to any season ticket holder or member identified, per the published sanctions policy.

“Information on the rescheduling of the game and any possible implication on other fixtures will be announced after discussion and agreement with the Premier League.

“We remain committed to dialogue and engagement with our fans through the Fans Forum and other appropriate channels.“ 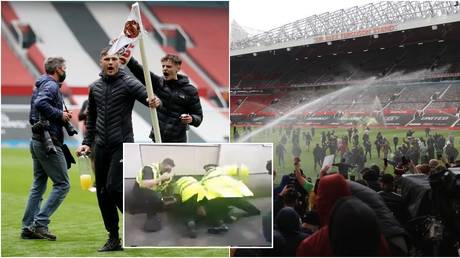 Canada is battling another pipelin...