A Greek court has heard that Manchester United skipper Harry Maguire tried to bribe police following his arrest on the Greek island of Mykonos last week amid reports that the star’s sister was assaulted with ‘date rape drug’.

Maguire is facing misdemeanor charges related to assault, verbal abuse, assault against police officers and attempted bribery following the incident last week at the popular tourist destination where the 27-year-old footballer, along with members of his party, were detained for engaging in a physical altercation with another group outside of a nightclub.

It was claimed by Maguire’s lawyer on Tuesday that his sister, Daisy, had been injected with a ‘date rape drug’ which caused her to collapse, sparking the confrontation between Maguire’s group and several other men – reported to be on Albanian nationality.

According to The Sun, she was ‘stabbed in the arm’ by a metal object which prompted to her losing consciousness. Maguire interjected, leading to the violent scenes.

Police allege that they were assaulted by Maguire and others when they arrived at the scene, and were later offered a bribe by the player.

“Do you know who I am? I am the captain of Manchester United. I am very rich. I can give you money. I can pay you, please let us go,” Maguire was quoted as having said to officer Mickolos Kolios.

Maguire, his brother Joe and another man, 29-year-old Christopher Sharman, deny the charges against them. If found guilty, it is likely that a fine will be levied against the men rather than a jail sentence.

Maguire has since returned to the UK where he is understood to have held talks with England boss Gareth Southgate ahead of Tuesday’s announcement of the latest international squad.

Maguire had reportedly wracked up a £63,000 ($83,000) bar bill in the hours prior, ordering a range of steak and lobster meals as well as vintage champagne and cocktails. It is understood that Chelsea midfielder Ross Barkley had been with Maguire shortly beforehand but isn’t understood to have been involved in the incident.

Maguire is being represented in court by his father Alan after it was ruled that the player wasn’t required to physically be in court. 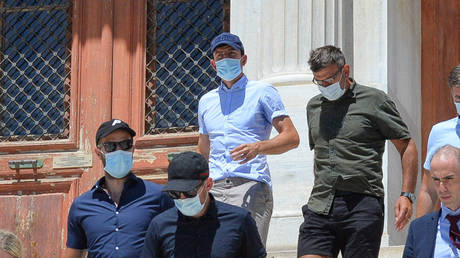